April 8, 2012 by ConcertKatie No Comments 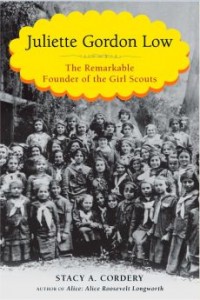 As I spent several years as a child as a member of the Girl Scouts, I was excited to read this biography of Juliette Gordon Low, the founder of the Girl Scouts.  I have to say, she led quite a life – the prologue of the book talked about how she married a man (Mr. Low) and was pretty much head over heels in love with him, but then she found out he was cheating on her.  She tried to get a divorce (even though in those days divorces were basically unheard of) but he passed away before the divorce was final.  Then all his money was left to his misstress and not Juliette! (Who actually goes by Daisy. Makes sense now why one of the levels in girlscouts is “Daisy”!)  If the intro to the book was THAT scandalous, then you know there must be some other good stories hidden within the biography.

Daisy was hard of hearing, and it was made even more difficult for her to hear when a piece of rice tossed after her wedding lodged in her ear.  This is also mentioned in the prologue, but is expanded upon a few chapters later. The poor woman had quite a few medical problems after her marriage.

It is after her husband’s death that she went on to found The Girl Guides, which later became known as The Girl Scouts.  (And funnily enough, it has the original oath in the book – but before I saw it I tried to remember it from back in the day and I think I pretty much could.  Although the one in the book was a little different since it was the Britsh version.)

This was quite a fascinating read about a fascinating woman, as I can not remember ever really discussing Daisy with my troop! I guess reading this made up for some lost time.  Now I feel like pulling out my old uniforms to see my patches and eating some cookies 😉

I receieved a free e-copy of this book from the publisher through NetGalley in order to write this review.

In celebration of the Girl Scouts’ centennial, a lively salute to its maverick founder.

Born at the start of the Civil War, Juliette Gordon Low grew up in Georgia, where she struggled to reconcile being a good Southern belle with her desire to run barefoot through the fields. Deafened by an accident, “Daisy” married a dashing British aristocrat and moved to England. But she was ultimately betrayed by her husband and dissatisfied by the aimlessness of privileged life. Her search for a greater purpose ended when she met Robert Baden-Powell, war hero, adventurer, and founder of the Boy Scouts. Captivated with his program, Daisy aimed to instill the same useful skills and moral values in young girls-with an emphasis on fun. She imported the Boy Scouts’ sister organization, the Girl Guides, to Savannah in 1912. Rechristened the Girl Scouts, it grew rapidly because of Juliette Low’s unquenchable determination and energetic, charismatic leadership.

In Juliette Gordon Low, Cordery paints a dynamic portrait of an intriguing woman and a true pioneer whose work touched the lives of millions of girls and women around the world.