April 2, 2012 by ConcertKatie No Comments 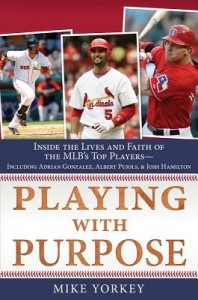 Back in February, I reviewed Playing with Purpose: Basketball, well, now that we’re approaching Baseball Season, Playing with Purpose: Baseball has been released! Unlike the basketball book, I had actually know of a majority of the players included in this book, but I do watch a whole heck of a lot more baseball than basketball.  The book features chapters on Clayton Kershaw, Ben Zobrist, Albert Pujols, Carlos Beltran, Adrian Gonzalez, Josh Hamilton, Stephen Drew, Jeremy Affeldt, Matt Capps, Mark Teixiera, Brian Roberts, Josh Willingham and appropriately, is closed out with a chapter on Mariano Rivera.

All these players have different paths that led them to God and their faith, some were a bit rockier than others (Josh Hamilton had struggled with drugs and alcohol and realized making God #1, his family 2nd and baseball 3rd was the key to turning his life around) but all play with their faith as an important aspect of their life.

I did notice what I believe to be an error in Josh Hamilton’s chapter.  It said he turned 7 in 1998, but then by 1999 and 2000 he was looking at colleges.  Looks like he turned 7 in 1988!  Also interesting was the fact that all the chapters were decently long, however, former Met Carlos Beltran’s chapter (the one I was obviously most interested in reading, being a Mets fan) was ridiculously short compared to the others.  I thought I was just imagining things, but the table of contents does probe me right – it was only 5 or 6 pages versus the 20 or so for most of the other players.  Oh well, his chapter still did teach me things I did not already know about him, so I can’t be too upset over it!

If you are a baseball fan, this book is definitely a must read.  It really opened my eyes to a lot of the players that I have seen play but didn’t know much about.  (Although I did know most of Albert’s story because there is a book out that I reviewed last year that focuses on Albert’s life and is faith based.)

I recieved a free copy of this book from Net Galley in order to write this review. I was not asked to write a positive review and was not otherwise compensated.

Jesse Florea, has worked at Focus on the Family for more than eighteen years. He is currently the editorial director for youth magazines. He oversees Focus on the Family Clubhouse (for kids eight to twelve) and Clubhouse Jr. (for three- to sevenyear-olds). He also co-hosts the biweekly “Official Adventures in Odyssey Podcast,” which often exceeds 100,000 listeners. Jesse is an avid sports fan who has written thousands of high school sports stories and more than a hundred magazine articles on sports personalities, and he was the co-author of two devotional 244 playing with Purpose books for sports-minded children: The One-Year Devos for Sports Fans and The One-Year Sports Devotions for Kids. He’s cowritten or edited more than a dozen other books as well. Jesse’s greatest baseball memory is taking batting practice in Coors Field in the mid-1990s with the Colorado Rockies and alongside the “Blake Street Bombers”: Andrés Galarraga, Dante Bichette, and Larry Walker. He lives in Colorado Springs, Colorado, with his wife, Stephanie, and two teenagers, Nate and Amber.

Joshua Cooley, a former full time sports editor/writer at The Baltimore Examiner and The Gazette newspapers in Maryland, has worked in the sportswriting industry since 1996. His first book— The One Year Sports Devotions for Kids (Tyndale), a collaboration with Jesse Florea and Jeremy Jones— was published in October 2011. Joshua currently works full time at his church, Covenant Life, in Gaithersburg, Maryland, and freelances for a variety of publications. His freelance credits include Sports Illustrated, the Atlanta Journal-Constitution, the Baltimore Sun, the Orlando Sentinel , the Pittsburgh Tribune-Review, Bethesda Magazine, Orioles Magazine , and Nationals Magazine. He has also written for Christian publications such as Sports Spectrum, Sharing the Victory , Breakaway, Brio, Focus on the Family Clubhouse, and Susie. In 2006, he contributed to the International Bible Society’s “Path to Victory” Sports New Testament. Joshua bleeds Baltimore Orioles’ black and orange, for better or worse. He and his wife, Kelly, are the parents of three children. The Cooleys make their home in Germantown, Maryland.