Our giveaway of a piczzle puzzle has now ended, but the great folks over at piczzle have given me a 21% off discount code for any of you who may want to purchase a picture puzzle.  Mothers Day is right around the corner – this would be a great idea if you are not sure what to get Mom! 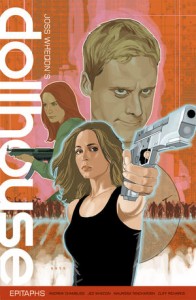 I never watched the series Dollhouse whenever it was on TV, but it was one of my brother’s favorite shows so when I saw the comic book available I figured I would check it out.  It is a bit longer than I had expected, 162 pages, but considering it is “Volume 1” I should have realized it would be a bit on the long side!

Unfortunately, once again, the Nook Tablet failed on making it a good quality read.  It also didn’t look that hot when I tried to read it on my computer either (I figured if I could actually read all the bubbles without problems then might as well try it on the computer) I am not sure if the technology is not there yet for graphic novels or if the version that was uploaded by Dark Horse Comics was just not HQ enough to expand the pages and make it more readable.  The magazines that I order through the Nook store seem to look fine and pages get bigger and quality is not lost.

I really like the idea of continuing a TV series in to a comic book, I know that a couple of shows I used to watch have been considered for this and now that I’ve read Dollhouse, I think I’d like to see that happen for my other shows too.  Especially if the series writers write the book as well, that way it is almost the same as watching an episode! (I know Pushing Daisies was one of the books being considered for this, I’m not sure if it ever went through with it or what the progress is with it!)

Dollhouse Volume 1 definitely has a lot of action in it, and it is probably so much more cost effective to have these things illustrated  than actually have to have a set made and everything demolished.  I also thought it was cool how at the end it had various sketches that were submitted to the actors and actresses for approval and different variant covers by different arists.  It was interesting to see all the different styles of each of the artists, but how they were all similar enough to work for the series.

You can check out a preview of this book at Dark Horse Comic’s website: http://www.darkhorse.com/Books/18-400/Dollhouse-Volume-1-Epitaphs-TPB

I received a free e-copy of this book from Dark Horse Comics through NetGalley in order to write this review.

The Rossum Corporation’s Dollhouse technology has gone viral with a synchronized phone call that wiped the minds of everyone it reached, turning them into mindless killers. Those who avoided the call–including show favorites Echo, Alpha, Mag, Zone, and Griff–must try to survive in the sudden apocalypse and be wary of Rossum’s expansive technological reach. This is only the beginning! Collects the complete miniseries.