February 21, 2012 by ConcertKatie No Comments 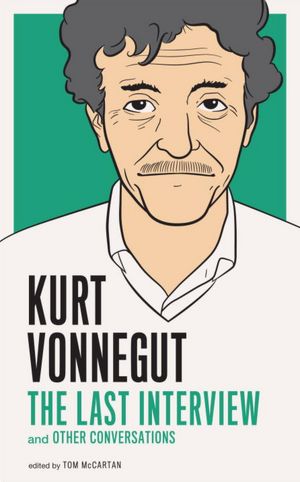 When I was in highschool, we had to do a biography on an author.  The names were chosen out of a hat.  I ended up with Vonnegut.  When I saw that a book with his last interview (as well as several other interviews) was available to review – I jumped at the chance to read it.

The Last Interview actually contains much more than that – it starts out with Kurt Vonnegut, The Art of Fiction where he was intereviewed by David Hayman, David Michaelis, George Plimpton & Richard Rhodes which was done in Spring 1977 for The Paris Review.  The second interview “There Must Be More To Love Than Death” was done by Robert K Musil in August 1980 for The Nation.  The Joe and Kurt show is a converation with Kurt Vonnegut and Joseph Heller with Carole Mallory done in May 1992 for Playboy (probably my favorite of all the included interviews.)  The Melancholia of Everything Completeld an interview by J.C. Gabel was done in August 2006 for Stop Smiling.  God Bless You Mr Vonnegut and interview by J. Rentilly for U.S. Airways Magazine in June 2007 and finally – The Last Interview by Heather Augustyn May 9, 2007 for In These Times online.

The interviews go over a range of topics – his writing, his time served in the war, schooling, politics, sex, tons and tons of different topics.  Kurt had incredibly interesting insight on many of these topics and it was interesting to read his view on politics from 1992 – many of the topics he touched on are still major political issues now – in 2012.

If you have any interest in Vonnegut at all, or perhaps enjoy learning more about great American writers, then I would suggest The Last Interview to you to read.  It is a short book, only 85 pages, and is read easily as it is set up in interview form with back and forth between those present.

I received a free review copy of this book from the publisher through NetGalley. I was not asked to write a  favorable review nor was I otherwise compensated. All opinions are mine.

One of the great American iconoclasts holds forth on politics, war, books and writers, and his personal life in a series of interviews, including his last published interview.

Born November 11, 1922 in Indianapolis, Indiana, KURT VONNEGUT’s black humor, satiric voice, and incomparable imagination first captured America’s attention in The Sirens of Titan in 1959 and established him as “a true artist” (The New York Times) with Cat’s Cradle in 1963. he was, as Graham Greene declared, “one of the best living American writers.” Vonnegut died on April 11, 2007.

CAROLE MALLORY is an American author, actress and former model who appeared in the films Looking for Mr Goodbar and The Stepford Wives.

ROBERT K. MUSIL is a scholar-in-residence and adjunct professor in the School of International Studies at American University where he teaches in the Program on Global enviromental Policitics and Nuclear Studies Institute.

J. RENTILLY is a Los Angeles- based journalist who writes about film, music, literature, and pop culture for a variety of national and international publications.

HEATHER AUGUSTYN is a corrsposndent for The Times of Northwest Indiana and a contributing editor for Shore Magazine. She has written for The Village Voice and E! The Envioronmental Magazine and is an avid reader of Vonnegut’s works.