February 19, 2012 by ConcertKatie No Comments 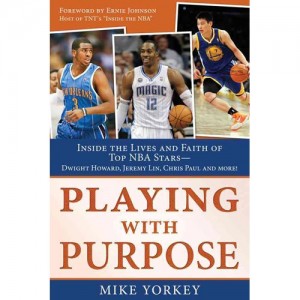 Playing with Purpose Inside the Lives and Faith of Top NBA Stars – Kevin Durant, Kyle Korver, Jeremy Lin and More! is a book by Mike Yorkey.  Each chapter focuses on the story of a different NBA player and how their Faith comes in to play in their life and in their game.  The last chapter has smaller write ups on several other players who have strong faith but does not get in to their stories quite as in depth as they do with the players in the earlier chapters.

I don’t really follow the NBA, so most of the players I had never even heard of – but that wasn’t really important to being able to follow their stories. If you are an NBA fan or just interested in learning more about players who have a strong faith, then this is the book for you.  The author has also written a book on NFL quarterbacks and one on baseball will be coming out soon as well. (Which I will also be reviewing so be sure to keep and eye out for that)

I received a free e-copy of this book from NetGalley in order to write my review. I was not asked to write a positive review nor was I otherwise compensated for my review.