Book Review: 101 Things You Thought You Knew About The Titanic

February 3, 2012 by ConcertKatie No Comments 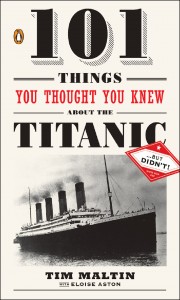 To be honest, I don’t really think I know anything about The Titanic, but I certainly enjoy reading about the ship because for some reason it fascinates me.  101 Things You Thought You Knew About The Titanic, But Didn’t is by Tim Maltin with Eloise Aston and breaks down some myths that surround the sinking of the unsinkable Titanic.

The books is broken down into several parts, so if there is specific area you are looking for more information on, it is easy to find.  The Ship, Omens, Maiden Voyage, Passengers, ‘Iceberg, Right Ahead’, Collision, SOS, The Californian Incident, Women and Children First, Final Moments, Rescue, Statistics and Aftermath.

The book contains text from The US Inquiry which interviewed witnesses and survivors about what they saw during and after the sinking.  I didn’t realize that this information was out there and it is pretty neat to read what different players had to say about the situation.  There is also information from The British Inquiry.  You can tell which is which throughout the text based on how they are numbered (more details on this is included in the book.)

A lot of the misconceptions seem to come from different films which have been made about the sinking of the Titanic.  It seems many find them to be historically accurate, when a lot of it was probably either made up for drama in the movies or assumed from information that the film makers gathered.

Overall, I learned a lot about the Titanic from this book – but like I said, I didn’t know all that much going in to it.  For those who are real Titanic and History buffs, perhaps this information isn’t all that new or interesting to you, but it was to me.

Ever since that night, fact has merged with fiction about what really happened. Now, for the first time, Titanic expert and author Tim Maltin gathers together all the key elements surrounding the disaster and presents a fascinating, compulsive and accurate account of what really happened. Taking as his lead one hundred and one oft-quoted theories about the fateful night, Maltin uses eyewitness testimony to rigorously examine each one in chronological order, and in so doing tells the true story of the Titanic and the night she sank with the loss of 1,500 lives.

I received a free copy of this book through NetGalley in order to write this review.