February 22, 2012 by ConcertKatie No Comments 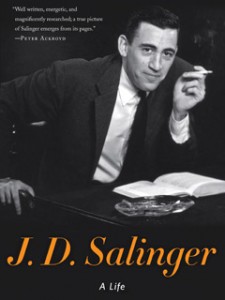 J.D. Salinger A Life is a biography by Kenneth Slawenski.  I am not sure why I chose to read this book, as I have not read any of Salinger’s books (although after reading the biography, I will be trying to fit in a few of his books into my reading list this year!).  Slawenski ran a website for Salinger, which I imagine is what got him most of his information on the author.  Although, he writes that Salinger often changed small details that he didn’t want the public knowing, so it could not have been an easy job to compile all the information he had into a book.

The book is long, over 400 pages, but unlike some biographies I have read, it didn’t get boring and difficult to read because of too many facts being thrown at me.  It talks about Salinger’s entire life, his time in the service, his marriages and children, his book characters, his relationship with the New York Post and much more.  If you have read any of Salinger’s books or are just interested in learning more about an interesting author, then I definitely recommend this book.  Salinger himself is quite an interesting character and I enjoyed reading about him.

I received a free e-book of this book in order to write my review. I was not asked to write a positive review and I was not otherwise compensated.

One of the most popular and mysterious figures in American literary history, author of the classic Catcher in the Rye, J. D. Salinger eluded fans and journalists for most of his life. Now comes a new biography that Peter Ackroyd in The Times of London calls “energetic and magnificently researched”-a book from which “a true picture of Salinger emerges.” Filled with new information and revelations-garnered from countless interviews, letters, and public records-J. D. Salinger presents an extraordinary life that spanned nearly the entire twentieth century.

Kenneth Slawenski explores Salinger’s privileged youth, long obscured by misrepresentation and rumor, revealing the brilliant, sarcastic, vulnerable son of a disapproving father and doting mother and his entrance into a social world where Gloria Vanderbilt dismissively referred to him as “a Jewish boy from New York.” Here too are accounts of Salinger’s first broken heart-Eugene O’Neill’s daughter, Oona, left him for the much older Charlie Chaplin-and the devastating World War II service (“a living hell”) of which he never spoke and which haunted him forever.

J. D. Salinger features all the dazzle of this author’s early writing successes, his dramatic encounters with luminaries from Ernest Hemingway to Laurence Olivier to Elia Kazan, his surprising office intrigues with famousNew Yorker editors and writers, and the stunning triumph of The Catcher in the Rye, which would both make him world-famous and hasten his retreat into the hills of New Hampshire.

Whether it’s revealing the facts of his hasty, short-lived first marriage or his lifelong commitment to Eastern religion, which would dictate his attitudes toward sex, nutrition, solitude, and creativity, J. D. Salinger is this unique author’s unforgettable story in full-one that no lover of literature can afford to miss.

Kenneth Slawenski is the creator of DeadCaulfields.com, a website founded in 2004 and recommended by The New York Times. He has been working on this biography for eight years. Slawenski was born in New Jersey, and has lived there all his life.