Book Review: He Stopped Loving Her Today by Jack Isenhour

February 29, 2012 by ConcertKatie No Comments 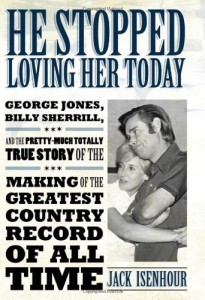 He Stopped Loving Her Today by Jack Isenhour is subtitled – George Jones, Billy Sherrill, and the pretty-much totallt true story of the making of the greatest country record of all time.  In all the biographies about George Jones previously, none focused on the music, more were about George’s life.  This book focuses on the music.  It is broken down in to 6 parts:


I particularly enjoyed the last part, which talked about the creation of the song.  There were several disputes over how long it took – some said from 1978-1980 and others said it took just a month.  Kind of crazy to have such discrepancies.  The tapes were even pulled from the recording and it is believed that the 2/79 dates on things may actually have been done in 2/80 and someone still wasn’t used to writing 1980 on things.  February seems like an awful long time to still be writing the wrong dates on t hings (usually it takes me a couple of weeks to get in the groove of a new year) but who knows!

Quite a fascinating book about an artist and song I knew nothing about. (I don’t follow countrry. I use to say I don’t like it, but that’s not true, because I do like some of it, just not all of it. And it’s not my go-to genre either.) I also liked the fonts and layout used for the front cover as well as each of the parts.  Like a concert poster!

I received a free e-copy of this book through NetGalley.  All opinions are mine and I was not compensated for this review.

When George Jones recorded “He Stopped Loving Her Today” more than thirty years ago, he was a walking disaster. Twin addictions to drugs and alcohol had him drinking Jim Beam by the case and snorting cocaine as long as he was awake. Before it was over, Jones would be bankrupt, homeless, and an unwilling patient at an Alabama mental institution. In the midst of all this chaos, über producer Billy Sherrill-the man who discovered Tammy Wynette and co-wrote “Stand by Your Man”-would somehow coax the performance of a lifetime out of the mercurial Jones. The result was a country masterpiece.

In He Stopped Loving Her Today, the story behind the making of the song often voted the best country song ever by both critics and fans, offers an overview of country music’s origins and a search for the music’s illusive Holy Grail: authenticity. The schizoid bottom line-even though country music is undeniably a branch of the make-believe world of show biz, to fans and scholars alike, authenticity remains the ultimate measure of the music’s power.

Jack Isenhour, Nashville, Tennessee, is the author of Same Knight, Different Channel: Basketball Legend Bob Knight at West Point and Today and co-author, with Dennis Rodman, of the basketball star’s memoir, I Should Be Dead by Now.