March 1, 2012 by ConcertKatie No Comments 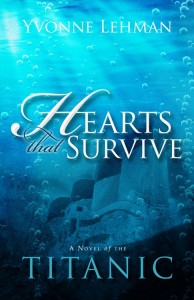 Hearts That Survive: A Novel of the Titanic is a Historical Fiction novel by Yvonne Lehman.  The story start with Lydia who is on the Titanic with 2 men. John and Craven. Craven works for her father’s business and is a bit older than Lydia and John is more Lydia’s age but makes toy trains (Lydia’s father’s company is with real trains).  John proposes to Lydia and they decide to get married on the Titanic on the grand staircase.  After a night of partying, they don’t hear the sounds of the ship’s engines anymore and realize that the ship is not moving.  Of course, we all know what happened and now there is a frantic scramble to get life boats.

Lydia had become fast friends with Caroline while they were planning the wedding and both end up in the same life boat along with Caroline’s maid, Bess.  Also with them are Phoebe and Henry, two children that belong to an author on board who leaves to help his ailing mother while Caroline takes the children to meet up with their father later.  Lydia’s new husband tries to get on the lifeboat with her, but is told women and children only and stays back to wait for a lifeboat when men are allowed to board.  Meanwhile, Craven says he is the only one that a little girl has and gets in a life boat even though he is of no relation to the girl.

The book comes in at over 400 pages but flows really well and is a quick read.  The story is great and will keep you wanting to read more.  Don’t assume that you know what is going to happen because you know the story of Titanic because that is really just a small part of the book!  There are however a lot of characters in the second half of the book, you may want to make a family tree to keep track of who is who 😉

On April 15, 1912, Lydia Beaumont is on her way to a new life with a boundless hope in love and faith. Her new friendship with Caroline Chadwick is bonded even more as they plan Lydia’s wedding on board the “grandest ship ever built.” Then both women suffer tragic losses when the “unsinkable” Titanic goes down. Can each survive the scars the disaster left on their lives?

Decades later, Alan Morris feels like a failure until he discovers he is the descendant of an acclaimed, successful, heroic novelist who went down with the Titanic. Will he find his identity with the past, or will he listen to Joanna Bettencourt, Caroline’s granddaughter, who says inner peace and success come only with a personal relationship with the Lord?

Will those who survived and their descendants be able to find a love more powerful than their pain?