September 27, 2010 by ConcertKatie No Comments 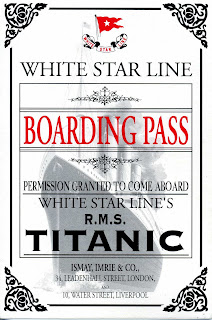 Saturday night my mom and I went to Foxwoods Casino to check out the Titanic Exhibit that they had in their convention center.  I had wanted to go for my birthday (back in July) but we weren’t able to find a time that worked until over this weekend.  The exhibit will be there until October 3.

Once you get your ticket, you are given a boarding pass for the ship.  On the pass is the information of a real passenger who was on the Titanic.  At the end of the exhibit you are able to find out if your passenger was saved or lost.

In the exhibit are a bunch of artifacts that were recovered from the ship.  It was amazing how good of condition a lot of these pieces were in.  There were postcards you could still read the writing on, currency, souvenirs that the passengers had picked up on their travels, personal items, clothing, etc.  The artifacts are just a portion of the items that were recovered as this exhibit is in places all over the country running at the same time.

On the wall there are stories about the ship, it starts off with quotes about how the ship was so great and that everyone was convinced that nothing bad would happen to it.  As we approached a couple of the rooms that were set up, the lights began flickering.  It really made it seem like there was trouble ahead.  You then went through several rooms, reading the information on the walls and checking out all the items in the cases.  They even had an iceberg that you could touch to see how cold the water would have been. It was COLD. Most of the people in the water died of hypothermia, not drowning.

The last room had a bunch of stories about the passengers.  How some of them survived and how some of them didn’t.  One of the stories that stuck with me was of a young baby Filly and his young mother (she was 18.)  Somehow Filly ended up on a different life boat than his mother and when they were reunited it took some time because another woman had claimed Filly as her own!

Also in the last room were HUGE lists of the passengers, divided by class and then broken down into SAVED and LOST.  My mom had a 22 year old girl who was traveling with her father.  I had a 46 year old woman who was traveling with her husband, friends of theirs and the friends daughter.  The friends had taken the daughter on a tour of Europe because she was being followed by a male suitor and they didn’t want her to have anything to do with him. Turns out he got on the boat too!  Since we were both first class and women we figured our chances were pretty good.

It took us a while, but we found that both of our passengers survived. The lists were long and the writing was tiny. My mom’s passenger’s father did not.  I also looked up the whole gang I was with and found they all survived, but couldn’t find the name of the daughter on either the saved or lost list.  Since everyone else was saved I just assumed she was as well.

Then we went into the gift shop where I picked up a postcard for my scrapbook since no photos were allowed in the exhibit.  We also got our boarding passes stamped as “Saved”.

When I got home, I did a couple of google searches and found out more about all “my people.”  The daughter was in fact saved, but was her mother’s from a previous relationship so she had a different last name and that is why I couldn’t find her.  They all left on Lifeboat 5 and the daughter and her suitor later were married! (He was 26 and she was 19 when they were on Titanic and I am assuming that the age gap is why her mother wanted her to have nothing to do with him!) I then searched my mom’s passenger and she was on Lifeboat 5 with all of my people as well!

It was all very interesting and I have found myself going back to Encyclopedia Titanica annd Titanic-Titanic looking up more stories.  Admission was $20 and it took us about 30-45 minutes to make our way through the exhibit.  For an additional fee you can get a little phone that has an audio tour, but we opted to do the tour on our own.

One of my favorite blogs, Simply Stacie, along with Survey Junkie is sponsoring a Secret Santa Gift Exchange between blogs and I will be participating! 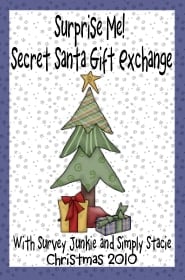 Each blog will be a Secret Santa and receive a gift from a Secret Santa. The limit is $20 including shipping (so roughly a $15 gift + shipping) and all blogs from the USA and Canada are welcome to participate!

All you need to do if you are interested in participating is to fill out the sign up form before October 6th!

Once sign up closes everyone will know who they are buying a gift for! It sounds like a lot of fun and I can’t wait to participate!