Book Review: Party of One

January 25, 2017 by ConcertKatie No Comments 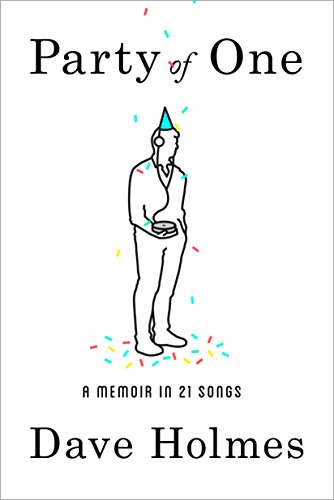 Party of One is a memoir by former MTV VJ Dave Holmes.  I totally remember watching him on Wannabe a VJ but rooting for Jesse and then being mildly annoyed that Jesse won but Dave somehow ended up on MTV more than him. (And then Jesse showed up at a Hanson concert I was at and I fangirled.)  I also somehow also missed the fact that Dave is gay.  (I guess I also didn’t really read the description of the book – I was just like, music related? Someone I know? Ok gotta read this one! Since it is definitely mentioned in there. Woops.)

The beginning of the book is about him growing up and how when he was younger he said he wanted to hang out with one of the guys at school because he thought he was “cute” to his Mom. He backtracked and went through high school closeted and came out when he was going to college, but it was at a time when it still wasn’t accepted.  He moved to New York after graduation and had some jobs that he wasn’t that into and then ended up auditioning for Wannabe a VJ (where there was a Hanson poster on the wall – unfortunately their only mention in the book – although all my other boybands are obviously represented more)

There aren’t a lot of behind the scenes dirt, but I found all the talk about his time at MTV interesting because it was back when MTV was my life and I could remember almost everything he was talking about.

The book goes on to talk about 9/11 and living in New York (and somehow being the last person to find out about it despite being in New York at the time) and then how he moved out to LA and tried his hand at acting but everyone thought he was ugly.

I found out a lot about Dave that I didn’t know about before and the book is really funny and well written and I enjoyed reading it. I like how he made it kind of like a mixtape – each of the 21 chapters is named after a different song with a few interludes thrown in for good measure!

I received a free copy of this book from blogging for books in order to write this review, I was not otherwise compensated.

From former MTV VJ Dave Holmes, the hilarious memoir of a perpetual outsider fumbling towards self-acceptance, with the music of the ’80s, ’90s, and today as his soundtrack

Dave Holmes has spent his life on the periphery, nose pressed hopefully against the glass, wanting just one thing: to get inside. Growing up, he was the artsy son in the sporty family. At his all-boys high school and Catholic college, he was the closeted gay kid surrounded by crush-worthy straight guys. And in his twenties, in the middle of a disastrous career in advertising, he accidentally became an MTV VJ overnight when he finished second, naturally, in the Wanna Be a VJ contest, opening the door to fame, fortune, and celebrity—you know, almost.

In Party of One, Holmes tells the hilariously painful and painfully hilarious tales—in the vein of Rob Sheffield, Andy Cohen, and Paul Feig—of an outsider desperate to get in, of a misfit constantly changing shape, of a music geek who finally learns to accept himself. Structured around a mix of hits and deep cuts from the last four decades—from Bruce Springsteen’s “Hungry Heart” and En Vogue’s “Free Your Mind” to LCD Soundsystem’s “Losing My Edge” and Bleachers’ “I Wanna Get Better”—and punctuated with interludes like “So You’ve Had Your Heart Broken in the 1990s: A Playlist” and “Notes on (Jesse) Camp,” this book is for anyone who’s ever felt like a square peg, especially those who have found their place in the world around a band, an album, or a song. It’s a laugh-out-loud funny, deeply nostalgic story about never fitting in, never giving up, and letting good music guide the way.