Book Review: A Shot With You

February 1, 2017 by ConcertKatie No Comments 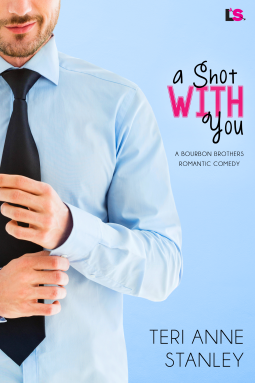 A Shot With You is the 2nd book in the Bourbon Brothers series.  I had not read the first before reading this one but I had no problems being able to follow along.  This book did get off to a bit of a slow start for me, especially for a romance novel.  The first several chapters were setting the characters up so you got to “know” them, but I would have liked to see more going on before about half way (or more) through the book.

Brandon Morgan works for his family’s bourbon brand in Kentucky and is currently on vacation in Mexico.  Not too keen on going on the fun cruise excursions, he instead books a tour to a tequila distillery.  He is going for work – he thinks that if he sells his bourbon barrels to the distillery they can use them to make their tequila and it is a win win situation.  When he arrives, his tour is led by the owner’s daughter, Lesa, and it seems like both are interested in each other at first sight.

After chatting (and almost kissing), Brandon ends up missing his bus back to the cruise ship.  Lesa and her cousin offer to drive him back but first he talks to her father about his business plan.  As luck would have it, Papa decides to send Lesa to Kentucky to check out the Bourbon company and see if making the deal is a good idea.  What’s also a good idea – Brandon and Lesa get some more time together to see where their relationship goes, if anywhere.

Brandon had been burned in the past by a former girlfriend, so he is hesitant to rush into anything – especially with someone who may be involved with his business.  But Lesa is just too irresistible.  Lesa isn’t sure she wants anything to happen with Brandon either, even though there is a mutual attraction.  She only wants to help the tequila business get back on its feet so she can travel the world. Alone.

But the two can’t resist each other forever! (Although it did kind of seem like they would for a while there!)  I did really enjoy this book, even though it did get off to a rocky start for me and I wasn’t sure if I was going to push through or give up on it.  I am glad that I didn’t give up on it because I did like the story and the characters.

Bourbon is in Brandon Morgan’s blood. His family owns the best bourbon brand in the country—or it will be with his marketing genius. And after meeting the fiery daughter of a tequila distillery owner, he’s never been more sure.

His barrels, her tequila. It’s a match made in heaven. But only if he can keep his hands off the owner’s daughter…and his secrets to himself.

Lesa Ruiz will do anything to keep Little Possum afloat, but one look at Brandon’s gorgeous dimples and Lesa knows two things for sure: forever is not in the cards with this man and he’s way too sexy to resist for long.

Well, three things… Brandon is hiding something, and she’ll need to get a lot closer to figure it out and save her family’s legacy. Shots, anyone?