February 3, 2017 by ConcertKatie No Comments 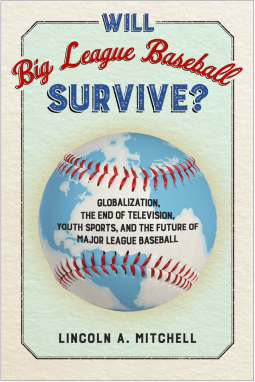 Will Big League Baseball Survive looks at the evolution of the game of baseball over the past few years.  Baseball stadiums used to be more like “churches” and are now being turned into malls with all sorts of other things you can do while at the game than watch the game.   There is a lot of talk about the drug use in baseball and how much of it happened on Selig’s watch and how much of the game changed while he was commissioner as well. It talked about John Rocker and his comments about New York (which ended up with him getting pelted with D sized batteries at a Mets game!)  There is even some talk about the World Baseball Classic and MLB’s involvement with it.

I thought this book was interesting and enjoyed reading the possibilities of the changes that may come to baseball in the future.  Only time will tell what will happen!

Major League Baseball is a beloved American institution that has been a product of the economic, social, and media structures that have evolved in the United States over the last century. In his shrewd analysis, Will Big League Baseball Survive?, Lincoln Mitchell asks whether the sport will continue in its current form as a huge, lucrative global business that offers a monopoly in North America—and whether those structures are sustainable.

Mitchell places baseball in the context of the larger, evolving American and global entertainment sector. He examines how both changes directly related to baseball—including youth sports and the increased globalization of the game—as well as broader societal trends such as developments in media consumption and celebrity culture will impact big league baseball over the next few decades.

His book ultimately proposes several possible scenarios for what big league baseball might look like. Will it become more global, smaller, or remain the same, or will it transform into some kind of hybrid of the three?