January 13, 2017 by ConcertKatie No Comments 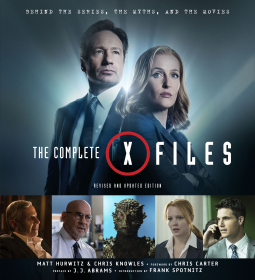 I never really watched The X-Files myself, but the rest of my family did so this was a show I did catch episodes of here and there.  It talks a bit about how the show went off the air in 2002 because in a world after 9/11 people didn’t want to believe that the government was hiding secrets from them anymore.  The book goes into the behind the scenes of the show and episodes and there are lots and lots of photos! Each season seems to be represented in the book and as someone who is not a diehard I thought that it was a nice compilation about the series and the material on the new season as well.

Celebrate the return of one of the greatest sci-fi shows of all time with this detailed guide featuring exclusive material from the brand-new season.

Returning after more than a decade off the air, the 10th season of The X-Files promises to be one of the most anticipated television events of 2016. The Complete X-Files, Revised and Updated Edition is the only authorized debriefing on all ten seasons of the cult television series and the X-Files films created by Chris Carter. The book takes readers into Carter’s never-before-seen archives with explanations of unsolved plots, breakdowns of popular episodes, a discussion of the FBI’s paranormal investigations bureau, and other insider information. In addition to exclusive interviews with the cast and crew, The Complete X-Files, Revised and Updated Edition features exclusive material and unpublished photographs from season 10, giving fans a backstage view of the making of this sci-fi phenomenon.