October 28, 2016 by ConcertKatie No Comments 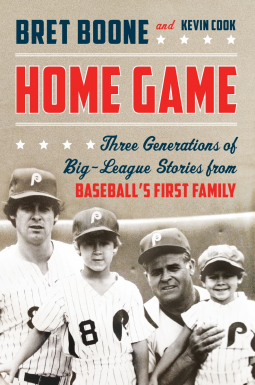 Home Game is written by Bret Boone who is a third generation major leaguer after his father and grandfather have both played in the bigs.  His brother is also in the majors.  This is the first family to have 3 generations and they were all all strs.   The book helped give a different perspective on the game and to see it through the eyes of the pros.  One fun thing to read was about how his brother was named on TV during the all star game when his Dad mentioned the name that the bench had decided on during the all star game! While I’m not really a fan of the teams that these guys played on, I always enjoy reading more about the game of baseball and this was a really great read.

About the Book
From the first third-generation baseball player in Major League Baseball history, a sometimes moving, always candid look at his family’s 70 years in the world of professional baseball.

A five-foot-ten firecracker who was spurned by scouts for his small size, supposed lack of power, and temper tantrums (one scout called him a “helmet-throwing terror”), Bret Boone didn’t care about family legacy as fought his way into the Major Leagues in 1992; he wanted to make his own way. He did just that, building a 14-year career that included three all-star appearances, four Gold Gloves, a bout with alcoholism, and the ignominy of being traded for the infamous “player to be named later.” Now that he’s coaching minor leaguers half his age, and his 15-year-old son has the potential to be a fourth-generation major leaguer, Bret is ready to reflect on and tell the story of baseball from the perspective of his family’s 70-year history in the sports.

Combining the brashness and candor of Ball Four with a dollop of Big Russ and Me sentiment, this book will trace the evolution of the game–on the field and behind the scenes–from Ray Boone’s era in the 1950s to Bob Boone’s in the 70s and 80s to Bret and Aaron’s era in the 90s and 2000s, when players made millions, dined on lobster in the clubhouse, injected themselves with PEDs, and had their choice of “Annies”–female clingers-on, or as today’s players call them, “road beef.” Along the way, the book will touch on pieces of Boone family lore, including Bret hitting zero dingers in a home run derby and Aaron’s home run (if you don’t know what this is referring to, then consult the nearest Red Sox fan). Blending nostalgia, behind-the-scenes profanity, close analysis of the game that only players can offer, and insight into baseball’s ongoing evolution as a sport and a business, Bret Boone will offer a one-of-a-kind look at America’s favorite pastime from a family who has seen it all.