Book Review: The Night The Stars Went Out

October 7, 2016 by ConcertKatie No Comments 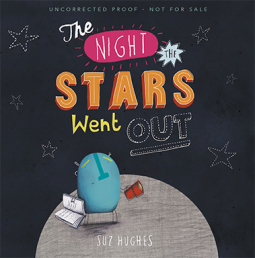 The Night The Stars Went Out is about Alien, who makes sure that the stars shine bright.  He has no friends because he is always so busy shining the stars!  That is until one night when the stars went out! In order to fix them, he needed to go to Earth for a special star varnish.  While on Earth he realized Aliens float!  He was assisted by a boy named George who helped him find the varnish and then asked him to play.  Even though he knew he needed to get back to work – he decided he’d take the time to play anyway.  Would this be the right choice? You’ll have to read the book to see!

Super cute story, super colorful illustrations that I think I enjoyed more than the story itself!

I received a free e-copy of this book in order  to write this review, I was not otherwise compensated.

Alien was the star controller for the entire galaxy, which was a big job for a very little alien. One night something disastrous happens, and Alien faces the biggest problem of his life. Will Alien be able to fix the stars? With a focus on friendship and problem solving, this picture book is a treat for everyone.
For ages 4-7.
About the Author: Suz Hughes’s work has been published in a number of books. She studied art and design with a main focus in children’s illustration, which has served her well. Suz likes to mix imagination with everyday life in her work, hoping to make her readers smile. Suz grew up in Wales and currently lives in Manchester.