September 23, 2016 by ConcertKatie No Comments 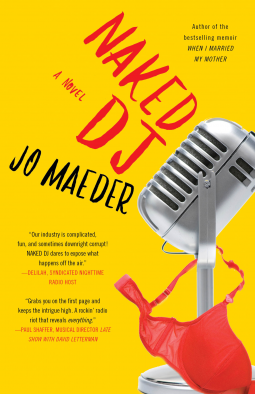 Naked Dj is about Jazmyn Brown – although that’s not her real name, she’s had several throughout her radio DJ career.  She has been hired in NYC to be a part of the “Bare Naked Radio Ladies” show.  If you make it in NYC you can make it anywhere but it seems like everything is setting Jazmyn up for failure.

She has a crazy fan who seems to have followed her from station to station that they refer to as Crazy Karl.  He seems quite harmless and ends up involved in a much bigger story of the radio station trying to get publicity because they may be going under.

Another sub story is Jazmyn and her first love, who was/is a rapper. Jazmyn helped him get his break on the radio and  they ended up splitting up.  They try to rekindle things but aren’t sure if it is a good idea or not.

There are a lot of characters in this book and a lot going on, but I found it to be a fun read.

Heroine Jazmyn Brown becomes a DJ on a radio station in Virginia and at age 17 falls madly in love with a rapper. The story takes place 11 years later after she’s crisscrossed the country and made it to NYC, and also has reunited with her first love. Only time will tell if that’s a good thing.