Book Review: To Katie With Love 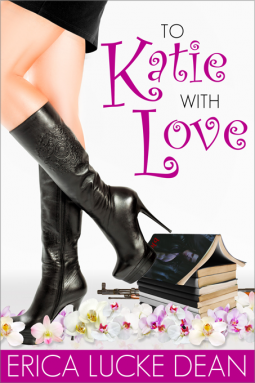 I was obviously first drawn to this book because of the title, but I am glad that I was because I absolutely loved this book. The main character is Katie James.  She is a banker and loves her some romance novels.  In her head, she has a fictional boyfriend and that is good enough for her, for now, because the only real-life guy she is interested in is off limits because he is her client!

Katie is out celebrating her 29th birthday and who happens to stop by? Mr. Off Limits, Cooper.  After having a few too many drinks, she finds herself waking up in Cooper’s bedroom dreaming of what else might happen.  Despite her thinking it may be a bad idea to date a client, the two start a relationship and become the gossip of the bank.  Cooper is very secretive and won’t tell Katie what he does for a living and one of her coworkers gets her convinced that he is an assassin since a few high profile people have showed up murdered on days that Cooper hasn’t been around.  Katie has quite the over active imagination and begins finding more and more clues that seem to prove this theory right.

I liked this book because in addition to being a romance novel with a main character that I could relate to, it also was a but of a mystery to try and find out just what exactly Cooper’s job is. (You do find out)  This was a relatively quick read and I hope that there are further stories about Cooper and Katie!

Banker Katie James has a serious thing for romance novels. She’d almost rather settle for a fictional boyfriend than risk her heart on a flesh-and-blood man. Besides, the only real guy she’s remotely interested in is her rich, unattainable client, the mysterious Cooper Maxwell.

Looking less like the ultra-conservative man she knows and more like a drop-dead sexy character from one of her books, Cooper crashes Katie’s 29th birthday party. But one too many drinks lands Katie in uncharted territory… Cooper’s bedroom!

Drunk on love, Katie dives headfirst into the relationship only to discover that Cooper is keeping secrets… dangerous ones. As if things couldn’t get worse, her meddling mother makes a surprise visit, digging up a whole new set of problems.

Who would have guessed having an assassin for a boyfriend would be the least of her worries?