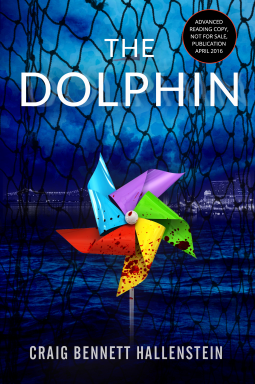 The Dolphin was a bit different than most of the books I usually read.  I was drawn to it because it is set in New Orleans.  It is not about the animal dolphin, but rather a sex offender that is considered a dolphin:

“When the law goes fishing for sharks, it casts a wide net. Sometimes it catches a dolphin. Not supposed to. Just happens. Unfortunately, after they’re caught, most dolphins die in the net”

The story follows Sean Jordan.  He was out delivering papers as a kid when his house exploded, killing his parents.  Sean somehow feels responsible for what happened.  He finds himself relocated in New Orleans as an adult.  Despite being a registered sex offender he has a pretty nice job, a wife and a daughter. Everything seems to be going pretty well for him.  That is until a new radio station shock jock comes to town.  He decides that he is going to “out” all the local sex offenders.  While this information is public, many don’t bother to look for it.  But LeGrande has decided it his business to tell the names and addresses of local sex offenders and gets the community in a frenzy.

Then there is another explosion. The aquarium.  A young girl is found dead.  Somehow Sean finds himself as a suspect, despite being innocent.  There is a second explosion.  Sean’s best friend is killed.  Again, Sean is the suspect.  With Mardi Gras just around the corner, one of the other radio station’s talk show host’s daughters disappears.  Of course, the police are looking at Sean.  His life is falling apart since being outed – he has lost his job, may be losing his wife and daughter and keeps getting dragged into all the police investigations as a suspect.

When trying to figure out what is going on and who is framing him, he ends up kidnapped as well.  The kidnapper is planning to do something big during Mardi Gras.  Can Sean figure out a plan to stop him before it is too late?

Throughout the book I liked Sean and was really rooting for him.  Sex offender or not, he seemed like a good guy and it seemed he got his status through a series of misunderstandings and misuse of power and justice.  Despite not having solid alibis, I knew he was innocent and was really hoping that he would figure out who did it and bring them down.  It was fun to read about New Orleans and Mardi Gras and recognize the street names from my trip there last year and be able to picture it all a little bit better in my head now that I have been there.

Former child prodigy and aspiring psychologist, Sean Jordan, moves to New Orleans, putting his past behind him, until a conservative radio station in a bid for higher ratings outs him as a dangerous sex offender. When the thirteen-year-old daughter of the station’s nationally celebrated talk show host disappears, police scramble to take down Jordan, unaware that he too is a victim of the kidnapper, terrorizing the city on the eve of Mardi Gras. Jordan has a chance to save the girl but only if he meets the kidnapper’s demands. Refusing could cost him his life.

Agreeing could cost him his soul.