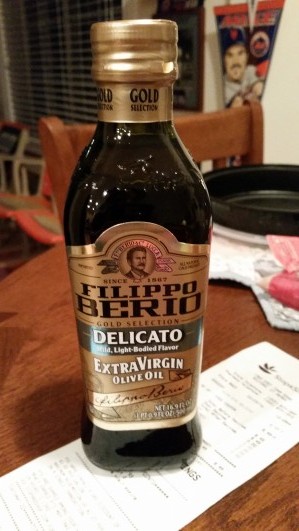 Robusto – A bold, full-bodied Extra Virgin Olive oil that adds a lively burst of flavor to a variety of recipes.

An olive oil that contains a select, premium blend of blood-tasting olive oils which provide a strong, vibrant taste.  An intense, fruity flavor is accompanied by a pleasant yet bitter sensation on the tongue and a peppery sensation in the throat.  Robusto offers persistent notes of fresh olives, artichokes, leaves and ripe tomatoes, all of which linger on the plate after swallowing due to this olive oil’s long finish.

Delicato – A milder taste that compliments your favorite dishes, inviting other ingredients to shine through.

An olive oil that contains a select, premium blend of mild-tasting olive oils which provide a smooth, mellow taste.  Delicato delivers a slightly fruity flavor, without the bitterness and pungency often associated with Extra Virgin Olive Oils. A hint of apple and ripe olive notes are present, but disappear soon thereafter, due to this olive oil’s short finish.

We mainly use Olive Oil as our salad dressing and when we made the replacement at Sunday dinner everyone said they thought the salad tasted better, but couldn’t figure out why.

One of the things I learned in the pamphlet I got sent with my package from Influenster was that Olive Oil is also healthy for you in addition to tasting great.  A magnet with conversions for using olive oil instead of butter or margarine was included and while I have not tried any of the substitutions yet, I am looking forward to trying it.

I received this product for free in exchange for this review through Influenster. I was not otherwise compensated. 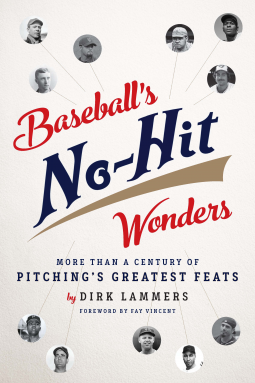 Baseballs No-Hit Wonders: More than a century of pitching’s greatest feats is a book about both perfection and near perfection. This book contains the “strange but true history of the no-hitter in America’s greatest game”

Each chapter looks back on a historic no hitter and after each chapter is a ‘did you know’? box with some details about other no hitters.  This book is long, just under 500 pages, but it contains everything you could ever want to know about no hitters in baseball – and then some.  Truly packed full with great information, trivia, stories and tid bits.

Baseball’s No-hit Wonders honors legendary pitchers Cy Young, Bob Feller, Nolan Ryan, and Sandy Koufax while introducing readers to the eccentrics and one-shot wonders. The book, the first of its kind in fifteen years, fleshes out the colorful characters, compelling narratives, and statistical oddities from baseball’s 290 no-hit efforts—as well as the many near-misses that are also part of the national pastime’s storied history.

There is detail and great research, but also a fun, breezy take on the game, from the no-hitter thrown by a pitcher on acid, the worst hitters most known for breaking up no-hitters, and guys with nicknames such as Bo, Bumpus, Bobo, Cannonball, and Nixey. Even the game’s greatest slugger is credited with a partial no-hitter, and all he did was throw a punch.

Book Review: Save Me, Kurt Cobain 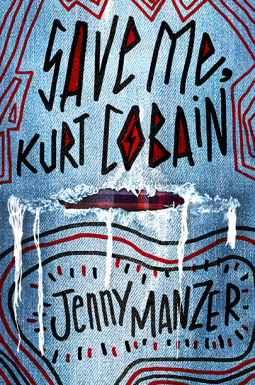 Save Me, Kurt Cobain is about a girl named Nico.  Nico’s Mom left when she was 4 years old and promised she would be back for her, but never came.  Nico listens to Nirvana and plays with a Ouija board with her best friend Obe (rhymes with robe).  Somewhere along the way Nico thinks that maybe her father is not her father and perhaps her real father is Kurt Cobain.  When she finds pictures that her Mom took at a Nirvana concert about 9 months before she was born, she seems to become even more convinced.  While on the ferry by herself heading home after visiting her Aunt in Seattle, Nico sees a man that looks like he could be Cobain, despite the fact that he has been dead for years.  She wonders if maybe it is him and he faked his death and decides rather than going home, she will follow him and try to get answers.  A winter storm hits and Nico can’t get in touch with anyone so her father panics and it is now all over the news that Nico is missing.  Nico is able to find her mother’s best friend and tries to get some answers as to where her mother went.  Nico thinks that she has an idea of where her mother may have been heading and as she and “Cobain” head there, they get caught by the police and Nico has to go home.  All of the news outlets want to talk to Nico so she uses this to her advantage and asks if anyone has information on where her mother might be, to please say something.

Throughout the book there is also a lot of biographical information about Kurt Cobain.  Nico has read all of his biographies and talks about his life, the background on Nirvana tracks, etc throughout.  In addition to being a fiction book, you will end up finishing it knowing more about Nirvana. (Unless of could you’re already a Nirvana fan, you may already know all the facts Nico mentions.)  Each of the chapters is named after different Nirvana songs and somehow works its way into the chapter.

I really enjoyed this book, Nico was a fun character to follow.  I received a free e-copy of this book in order to write this review. I was not otherwise compensated.

What if you discovered that Kurt Cobain was not only alive, but might be your real father? This nuanced and bittersweet YA debut will keep you guessing until the end.


Nico Cavan has been adrift since her mother vanished when she was four—maternal abandonment isn’t exactly something you can just get over. Staying invisible at school is how she copes—that and listening to alt music and summoning spirits on the Ouija board with her best friend and coconspirator in sarcasm, Obe. But when a chance discovery opens a window onto her mom’s wild past, it sparks an idea in her brain that takes hold and won’t let go.

On a ferry departing Seattle, Nico encounters a slight blond guy with piercing blue eyes wearing a hooded jacket. Something in her heart tells her that this feeling she has might actually be the truth, so she follows him to a remote cabin in the Pacific Northwest. When she is stranded there by a winter storm, fear and darkness collide, and the only one who can save Nico might just be herself.