March 4, 2016 by ConcertKatie No Comments 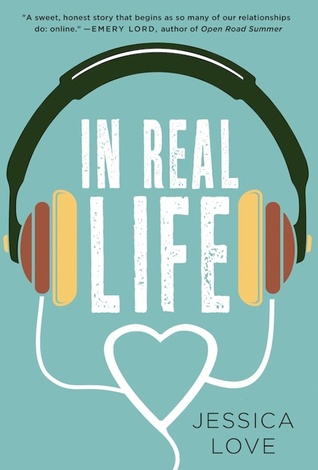 In Real Life had no synopsis of the book when I chose to select it as something I’d like to review, so I truly judged the book by its cover and decided I would like to read it. Fortunately the book cover did not steer me wrong and I did enjoy the book.

In Real Life is about Hannah who lives in California and her best friend Nick who lives in Vegas. The two met through their older siblings who had met at a concert several years earlier.  The two talk on the internet and the phone almost every day, but have never met in real life. They are now 16 years old and wanted to meet half way (they live about 4 hours apart) but Hannah’s parents had said no way after her sister Grace ends up with “food poisoning” (hungover) and can’t drive her there.

But when their parents go away on a cruise Hannah decides it is time to stop playing by the rules and Hannah, Grace and Hannah’s best friend Lo head to Vegas to surprise Nick at the House of Blues where his band is playing a concert.

Once they arrive, things aren’t quite what they seem.  Hannah had thought that Nick was the guitarist in the band and that he was single – when she arrives there is a girl hanging all over him and kissing him. And when the band takes the stage, it is Nick’s brother Alex playing guitar and Nick selling merch.

The gang goes out on the town in Vegas (with their fake IDs, of course) and when Nick tells Hannah he actually had feelings for her, Hannah runs away, even though she thinks she may feel the same.

Will this ruin their friendship or will both be able to tell their true feelings for each other ?  Well, you’ll have to read to find out because I am not telling!

One of my favorite parts of the books was how Nick sent Hannah a pressed penny from Vegas and Hannah sent him one back from Disneyland – which Nick wears on a necklace.  When they are going through Vegas they happen to find another penny machine and point it out to each other. As someone who collects these pennies I really liked to see them included in the story and being such an important thing to both of the characters!

Hannah Cho and Nick Cooper have been best friends since 8th grade. They talk for hours on the phone, regularly shower each other with presents, and know everything there is to know about one another.

Hannah has spent her entire life doing what she’s supposed to, but when her senior year spring break plans get ruined by a rule-breaker, she decides to break a rule or two herself. She impulsively decides to road trip to Las Vegas, her older sister and BFF in tow, to surprise Nick and finally declare her more-than-friend feelings for him.

Hannah’s surprise romantic gesture backfires when she gets to Vegas and finds out that Nick has been keeping some major secrets. Hannah knows the real Nick can’t be that different from the online Nick she knows and loves, but now she only has night in Sin City to figure out what her feelings for Nick really are, all while discovering how life can change when you break the rules every now and then.