Book Review: Destroying the Tangible Illusion of Reality; Or, Searching for Andy Kaufman

January 22, 2016 by ConcertKatie No Comments 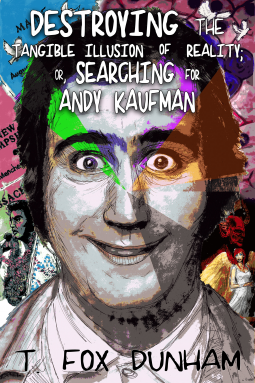 I’m not sure exactly what drew me to this book – maybe the colorful cover, maybe the mention of Andy Kaufman.  But this book was pretty much as weird and out there as I was expecting it to be.  I started reading this book twice.  The first time I couldn’t get into it and left it hoping it might expire before I got a chance to read it so I’d have an excuse not to.  The second time I was able to get about halfway through it before taking a break to catch up on some other books.  I did finally end up finishing it, though.

Most of the reviews I found say that it is a good book. But don’t say why.  I wondered why, at first. Then I finished the book and it’s kind of hard to describe it? It’s good. It’s interesting. It’s different. The book starts with Anthony storing his sperm as he is started treatment for cancer.  Anthony’s friend thinks that he kind of looks like Andy Kaufman and they end up finding out that Anthony’s mom was one of the women that Andy had wrestled.  Then they go on a bit of a journey to find Andy, since they now believe that Anthony is his son.  There are a lot of interesting characters that they meet along the way. The book ended up being just as colorful and wild as the front cover is.

In this surreal road novel, Anthony searches for the father he’s never met: Andy Kaufman, the legendary song-and-dance man from the ‘70s. There’s a few problems here, of course. A) Andy Kaufman died in 1984, and B) Thanks to a recent cancer diagnosis, Anthony doesn’t have much longer to live, either. However, new evidence has come to light that questions whether or not Kaufman is actually dead. Could he be in hiding, after all these years? Anthony is determined to discover the truth before his own clock runs out. During his travels, he will encounter shameless medicine men, grifters, Walmart shoppers, the ghosts of Elvis and Warhol, and the Devil himself.

An introduction from T. Fox Dunham, author of Destroying the Tangible Illusion of Reality; or, Searching for Andy Kaufman

These are the most important words I’ve written, and if you don’t listen, your life is an illusion. I was the tenth person in the world to be diagnosed with composite lymphoma—a rare combination of large cell lymphoma and hodgkins. The survival rate didn’t exist. I came through it. I don’t know how. Friends tell me it’s amazing I did. No. It’s just some shit that happened to me. Chemo wrecked my body, then daily radiation for five months to my head, neck and chest devoured me slowly. People never ask me what dying was like. They don’t want to know. People live in the false pretense that they are immortal. Death happens to people on the news.

This book is what it felt like to die.

I bonded to Andy Kaufman in spirit because he shattered the illusion of reality, though losing himself as he did. Reality is a construct, created by humans to give value to a system, to provide meaning to their lives. When you’re dying, meaning drains out of much of it, and you realize you created and fed into forces like fear.

Love is real. When I was burned down to nothing, a stub of my life, all I had left was love.

This summer, I married the woman of my dreams, Allison, and she has given me a future. A few weeks ago, I was diagnosed with the return of my cancer, and anon I will need treatment again, probably surgery and radiation. It will never be gone.

Read this and understand death so you can know how to live.