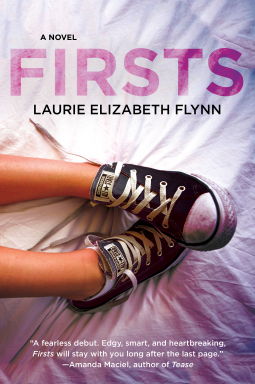 I found Firsts to be almost 2 stories in one. I guess I picked the right spot to stop after one reading session and pick up again (just about half way through the book).  In the first half of the book, Mercedes who is 17 has been helping boys at her high school lose their virginity so she can give them tips on what to do and what not to do when they finally decide to have sex with their girlfriends.  Mercedes swears that no one will ever find out, but has been keeping track of all her secrets so far.  At first she had just wanted to pay it forward and help 5 guys, but the number keeps increasing 7, 10…

I was a bit disturbed that this was the subject matter for a young adult book, although I am sure that stuff like this does really happen in high school.  The second half of the book made it out to be more of a cautionary tale.

Mercedes best friend Angela is waiting until marriage and thinks that she has the perfect boyfriend who also wants to wait.  But when he finds out about Mercedes services, well – there’s a lot of drama and I’m not sure I could even recap it if I tried – and it’s worth reading the book to find out how everything unfolds for yourself. But Mercedes finds out that this guy is not at all what he says he is, but isn’t sure how to let Angela know.

Eventually ALL Mercedes secrets come out and she has to figure out how to recover from it all.  But she tries to get by with a little help from her friends.

Overall this was a good book, well written, and you couldn’t help but feel for Mercedes, who was certainly acting out due to the situations she had been in earlier in her life and her home life with her parents.  Although I thought I figured out part of what had happened to her while it was happening, turns out there was a lot more going on than I had even seen coming.

Seventeen-year-old Mercedes Ayres has an open-door policy when it comes to her bedroom, but only if the guy fulfills a specific criteria: he has to be a virgin. Mercedes lets the boys get their awkward fumbling first times over with, and all she asks in return is that they give their girlfriends the perfect first time-the kind Mercedes never had herself.

Keeping what goes on in her bedroom a secret has been easy – so far. Her mother isn’t home nearly enough to know about Mercedes’ extracurricular activities, and her uber-religious best friend, Angela, won’t even say the word “sex” until she gets married. But Mercedes doesn’t bank on Angela’s boyfriend finding out about her services and wanting a turn – or on Zach, who likes her for who she is instead of what she can do in bed.

When Mercedes’ perfect system falls apart, she has to find a way to salvage her own reputation -and figure out where her heart really belongs in the process. Funny, smart, and true-to-life, Laurie Elizabeth Flynn‘s Firsts is a one-of-a-kind young adult novel about growing up. 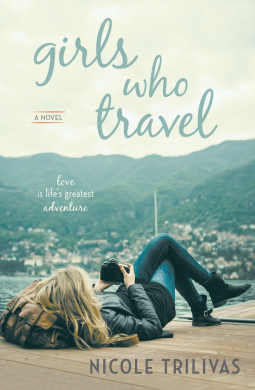 Girls Who Travel was not quite what I was expecting from the title (there’s really only one girl who travels in the book) but I did end up quite enjoying this story.  The main character is Kika Shores.  She had been traveling the world and buying different items and selling them on her website which was doing pretty well but then her year tour was up so she came back to New York.  In New York she is working in an office and finds her cubicle far too constricting.  When she forgets to schedule a meeting for her boss with the head of a big company, she calls the assistant in hopes that “The Vile Bae” will bail her out.  Bae agrees to as long as Kika runs some errands for her, but when Kika’s boss shows up Bae tells him that Kika dropped the ball, again.

Kika ends up losing her job and while her Mom seems to think everything happens for a reason, Kika isn’t so sure.  She wants to get her website back up and running but in order to do that she has to save money to travel to pick out the items to sell!

Kika’s friend Elsbeth ends up calling her and asking if she wouldn’t mind coming to London to au pair for her daughters, Gwen and Mina.  Kika agrees and is off to London with nothing but a backpack.

Meanwhile, she keeps reminiscing about her love Lochlon, an Irish man she met while traveling that she hasn’t seen in quite some time. But now that he is home in Ireland because his father is sick, maybe they can meet up since they aren’t that far apart anymore.

She also seems to have a love-hate relationship with the guy next door, Aston, who she ends up finding out is the heir to the big company that she messed up the meeting with.  She might be interested in him, until she finds out that he doesn’t like to travel! Is that a deal breaker?

But she can’t worry about Aston yet, Lochlon is coming to visit!  And… it’s all down hill from there.  But with a couple of weeks without her cell phone due to a no-technology trip with the family she is the au pair for – will she be able to have her happily ever after?

A hilarious, deftly written debut novel about a woman whose wanderlust is about to show her that sometimes you don’t have to travel very far to become the person you want to be…

There are many reasons women shouldn’t travel alone. But as foul-mouthed, sweet-toothed Kika Shores knows, there are many more reasons why they should. After all, most women want a lot more out of life than just having fun. Kika, for one, wants to experience the world.

But ever since she returned from her yearlong backpacking tour, she’s been steeped in misery, battling rush hour with all the other suits. Getting back on the road is all she wants. So when she’s offered a nanny job in London – the land of Cadbury Cream Eggs – she’s happy at the prospect of going back overseas and getting paid for it. But as she’s about to discover, the most exhilarating adventures can happen when you stay in one place…

Wise, witty, and hilarious, Girls Who Travel is an unforgettable novel about the highs and lows of getting what you want—and how it’s the things you least expect that can change your life. 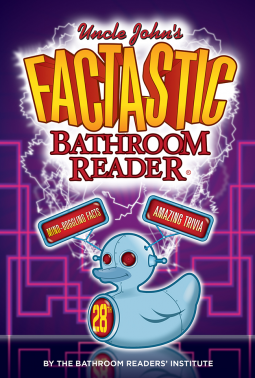 Uncle John’s Factastic Bathroom Reader is back in its 28th edition of the book.  The book has over 500 pages of random trivia and fun knowledge that you can learn while spending some time in the bathroom. The reader has information on a ton of topics, to things to Beatles did first and how the Monkees influenced Star Trek. (ok so maybe I only paid attention to thinks involving boybands)  There is a lot of fun stuff to read and you’ll be sure to impress your friends when you repeat some of what you learned to them. Just don’t let them know where you were when you learned it 😉

Uncle John got a Factastic facelift for the 28th all-new edition of this beloved book series — now with a classy cloth cover on the outside and a sleek style on the inside! All of Uncle John’s Bathroom Reader favorites are packed into these 544 glorious pages – from little-known history to the origins of everyday things—plus odd news, weird fads, quirky quotes, mind-bending science, head-scratching blunders, and all sorts of random oddities. Oh yeah, and thousands of incredible facts! Feel smarter (and a bit more dignified) as you settle into:

• Weird Body Parts of the Rich and Famous
• The Wild Man of Borneo
• Cryptic Movie Titles Explained
• “Pathological Generosity” and Other Real Medical Conditions
• How to Perform CPR on Your Dog
• When Postal Workers Go Rogue
• Start Your Own Country!
• Animals Under the Influence
• Welcome to No Mans Land
• The Mad Potter of Biloxi
• Saved From the Trash: The “Lost Leonardo”
• The Ten Longest Wars in History
• Stomach-churning Food-Safety Mistakes
• You Swallowed What?
• Incredible Stories of Survival
• The Case of the Stolen Bridge and Other Weird Crime Reports


And much, much more! 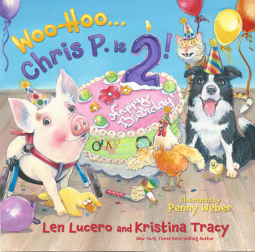 Chris P Bacon is 2 and this is a great new book that tells you all about his life and how he ended up going from being ready to be euthanized due to malformed back legs to becoming an internet sensation! I really like how Chris P Bacon (funny name for a pig, huh?) helps other kids with disabilities and are different because he is different too.  This is a sweet pig and I was happy to catch up with him and wish him a happy 2nd birthday!

I received a free e-copy in order to write this book. I was not otherwise compensated.

Chris P. Bacon is one remarkable pig. Born with malformed hind legs, he was taken to a veterinarian to be euthanized—but luckily, that vet was Len Lucero, who saw that the little guy was special. Chris P. went home with Dr. Len and within a matter of weeks became an Internet sensation and a media darling, winning thousands of hearts all over the world. Before long, he was a famous author, too!

In Chris P.’s first two books, Chris P. Bacon . . . My Life So Far and How to Roll Like Chris P. Bacon, readers watched him treat his pals to ice cream cones, decorate the barn for a hoedown, bake a batch of Pigs in Mud cookies, and much more. Now he’s back—and it’s his birthday! He is turning two, and, boy, is he excited. He can’t wait for a day full of fun, friends, and family (and grapes and Cheerios, of course!). Follow Chris on his big day, starting with his morning rounds on the farm, where he shares his contagious happiness with all of his friends. Watch him prepare for his big party, and finally join him in the celebration and see what his furry and human friends have to say about Chris’s first two years as everyone’s favorite Pig on Wheels!