January 22, 2016 by ConcertKatie No Comments 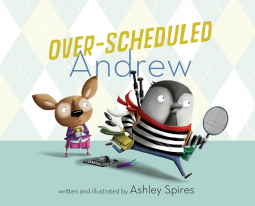 Over-Scheduled Andrew is about a Penguin named Andrew. He likes to act so he joins drama club. Then he joins a bunch of other clubs to help his performance in the drama club get better, like debate club, dance, karate, chess, etc.  But when he starts to fall asleep when he is hanging out with his best friend – in the 15 minutes he has managed to carve out for her in his week that doesn’t interfere with all his clubs he realizes he may be taking on too much.  And when his falling asleep ends up making something else terrible happen… Andrew decides to cut back on the clubs and involvement and add more time hanging out with his friends having fun!

A cute book that teaches you that even though you want to do it all, sometimes you just can’t. And spending time with your friends and having fun is important.

Andrew loves putting on plays so he decides to join the drama club at school. Determined to make his performance the best it can be, he joins the debate club to practice his public speaking. He signs up for dance and karate to help with his coordination. Then he’s asked to play for the tennis team and edit the school newspaper. Before long he’s learning to play the bagpipes, attending Spanish classes and joining the French film club. Suddenly Andrew doesn’t have time for anything or anyone else, not even his best friend Edie. And he definitely doesn’t have time to sleep. Will Andrew figure out how to balance all his favorite activities and his best friend at the same time? A hilarious, over-the-top look at a common issue many kids today face.