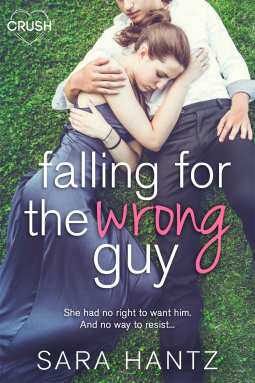 I actually read this book a while back and forgot to write the review. Oops! So I am working off of memory and I’ve rad several books since so forgive me if I miss any major plot points.  This book is about Mia.  (At least I am pretty sure her name is Mia even though the book write up says Ruby.) Her brother has a friend, Drew, who Mia has always had a crush on.  But then there is an accident and Mia’s brother’s ex-girlfriend dies in a fire and Drew gets scarred from the fire.  Mia’s brother, Blake, is no longer talking to Drew because he is upset that Drew was with his (ex) girlfriend.  You see, Blake and his girlfriend were on again off again and even though this may have ended up being the last time they broke up (accident or no accident), Blake isn’t sure he will ever forgive Drew.

When Drew is back at school everyone is treating him different, except Mia, who still has feelings for him. They end up partnered in a group project and Blake is not happy they are spending so much time together.  Of course, they end up secretly dating but no one can know.  But slowly more and more people are finding out. Even Mia’s Mom is ok with it, she had missed Drew being at the house.  But how will Blake react?

I liked this book enough that I actually remembered most of the plot even a month or so after I read it – which hardly ever happens. (Though I am glad it did in this case since I was slacking and forgot to review it!) Although the book was wordy and the relationship between Drew and Mia seemed a bit drawn out at times, for a YA novel I thought it was pretty good.

I received a free e-copy of this book in order to write this review. I have not been otherwise compensated.

Ruby Davis has a crush on her brother’s best friend. At least, he was his bestie until the big betrayal. Now Drew is off limits to everyone, especially Ruby. She can’t stand the way people treat him, or the way he feels about himself. It isn’t right. And those deep green eyes are calling to her.

Drew is scarred and damaged, and he has no business even looking at Ruby. But he can’t help himself. She’s beautiful, but he does his best to stay away. When they are assigned a school project, they become reluctant friends – even though they want so much more.

She’s torn between her feelings for Drew and loyalty to her brother. There’s no way they can ever be together…but love just might find a way.