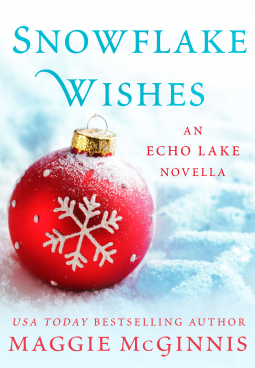 In Echo Lake, they are prided on their Snowflake Ball – which has matched up 49 successful marriages through their singles tree.  This year, Piper Bellini is dreading the ball, but Mama B forces her to go by guilt tripping her with a nice dress.  Her name keeps being picked off the singles tree, she dances with the single guys just to please everyone but doesn’t think she will become the 50th marriage.

Then she is paired up with Noah Drake. To Noah, Piper is the one that got away.  It had been 7 years since they had broken up and he returned to Echo Lake expecting her to be married with 6 kids – but it turns out she was still single.  They have their dance and go talk and end up heading out and ended up in a blizzard sleeping in a diner.  It seems like there may still be a spark between them.

When they see a car off a cliff on their drive home, Noah springs into action.  It is here that Piper tells him exactly how her parents died, something he had never known before.  It is with this confession that Noah realizes why Piper is the way she is and why she was always so against his career and broke up with him over it.  He says he will be going away for a year and hopes she will wait for him…

But will he have a change of heart?

This was a short book, under 100 pages which was the perfect length.  I loved the story and the characters. It had a lot of content in it even though it was so short.  Would love to read more books like this.

Noah Drake was that guy–the one always on the lookout for his next adrenaline high, so it was no surprise when he took off across the world, seeking adventure as a travel writer. But one thing he could never escape was Piper Bellini, the girl who got away–the girl he let get away, a fact he’s never let himself forget. When he returns to Echo Lake to see if there’s any chance the flame between them can be rekindled, he never expects to spend the night holed up with Piper in a roadside diner while a blizzard rages outside. It’s exactly the kind of situation that sent Piper running years ago. But this time, Noah may have been handed a Christmas miracle, and he intends to make all of his and Piper’s wishes come true…