Book Review: The Girl Who Broke the Rules

November 6, 2015 by ConcertKatie No Comments 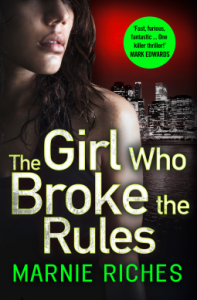 I used to have a rule – that I would finish every book I had to review because you never knew if you couldn’t get into it but it would find its groove later in the book and end up actually being good.  But when it came to The Girl Who Broke the Rules, I broke my own rule.  This book is long. It is over 400 pages and it is 95 chapters.  I didn’t want to end up wasting what could have been days worth of reading time on it.  It promotes itself for anyone who loves Stieg Larsson and if you’ve read my book reviews regularly you know that The Girl With The Dragon Tattoo and that series are some of my favorite books, ever. So you can see why I was excited to check this one out.  But, it just missed the mark for me.  This book takes place in Europe, it has strong language, and is the 2nd book in a series (which may have something to do with why I couldn’t get into it, I never read the first one.)  It’s about a serial sexual killer, it’s fast paced and it is a thriller – but just not for me.

If you think you may like the book, I’d suggest starting with the first one in the series, just in case that is what did me in.  Other reviews on GoodReads seem to be that it was excellent (though there are a few that felt the same as I do.)

The pulse-pounding new thriller from Marnie Riches. For anyone who loves Jo Nesbo and Stieg Larsson, this book is for you!
When the mutilated bodies of two sex-workers are found in Amsterdam, Chief Inspector van den Bergen must find a brutal murderer before the red-light-district erupts into panic.

Georgina McKenzie is conducting research into pornography among the UK’s most violent sex-offenders but once van den Bergen calls on her criminology expertise, she is only too happy to come running.

The rising death toll forces George and van den Bergen to navigate the labyrinthine worlds of Soho strip-club sleaze and trans-national human trafficking. And with the case growing ever more complicated, George must walk the halls of Broadmoor psychiatric hospital, seeking advice from the brilliant serial murderer, Dr. Silas Holm…