Book Review: From Skedaddle to Selfie

November 6, 2015 by ConcertKatie No Comments 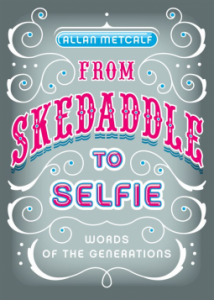 From Skedaddle to Selfie: Words of the Generations talks about what words were created by each generation and how slang words that seemed to have been created with each generation came about and how they are used today. It starts with The Republic Generation – 1742-1766 and goes all the way to the Homeland Generation – those born 2005 to present.

It was interesting for me to see what words came about from my generation (The Millennial Generation or Generation Y) and how I feel about some of the words – like “Selfie”, “Yolo”, etc. and wonder if some of the people living in earlier generations had any distaste for words that I use all the time now, like “fan” or “rock and roll” or “ok” or “sexy” or “slacker” to name a few.  And some of the words I hadn’t even heard of before reading this book.

I like how the book was separated out by generation, and then by word. It talked about what the word meant and some uses of it in novels, etc. So in addition to being a bit of an english language book it is also has some history included.

It was also interesting to see the creation of one of my least favorite words – “deadline” – that it first was an actual line in the ground or a fence at a prison camp! If you crossed it, you’d be shot dead.  I’m certainly happy when I say “deadline” now, that’s no longer what I am talking about! Also surprising was “dude” was actually from The Progressive Generation – those born in 1843-1859. YES, the 1800s!!

It was also amused by the fact that the words I use the most in my every day life are those from the Thirteenth Generation or Generation X, which is those born in 1961-1981 – or the generation before mine. Words like Slacker, Hacker, Geek, Nerd, Dork, You Guys, Like (as much as I try not to), Hey, Road Trip!, Hook Up, Whatever, Fun – and well that is almost all the words in that section.

I’m also kind of bummed about the semicolon being included. I get that it’s a “thing” now – but it’s all about sentences not ending.  When I write code, the semi colon means… the line has ended.  Kind of the opposite of what they’re going for and as someone who has been writing a lot of code lately (between a class I’m auditing and working on my own websites) “the end” is the first thing I think of when I see a semi colon. Kind of defeating the purpose of this movement or whatever that is going on. (See, there I go using whatever, though perhaps not in the sense that it was being talking about earlier. Whatever!)

If you are into writing and language and stuff like that (so profound), I think you’ll find this book as interesting as I did. It was fun to read and interesting to see how all these words came about.

From baby boomers with ‘groovy’ and ‘yuppie,’ to Generation X with ‘whatever’ and ‘like,’ each generation inevitably comes to use certain words that are particular to its unique time in history. Those words not only tell us a great deal about the people in those generations, but highlight their differences with other generations.

In this entertaining compilation, Allan Metcalf, author of OK: The Improbable Story of America’s Greatest Word, shows that each generation–those born within the same roughly 20-year time period–can be identified and characterized by its key words. Metcalf tells the story of the history and usage of these words, starting with the American Revolution and ending with the post-Millennial Homeland generation. With special attention to the differences in vocabulary among today’s generations–the sometimes awkward Millennials, the grunge music of Generation X, hippies among the Boomers, and bobbysoxers among the Silents–From Skeddadle to Selfie compiles dozens of words we thought we knew, and tells the unheard stories of each and how they accompanied its generation through its time.