Book Review: Stuff You Should Know About Stuff 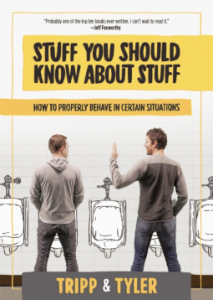 Stuff You Should Know About Stuff is all about how to conduct yourself in public, communicating, in really specific situations, with friends, with (more than) friends, with certain other people and in other situations that they wanted to include in the book but couldn’t fit anywhere else.  I especially loves the section on concert etiquette! And I got a kick out of the “$100 says you’re going to regret buying that thirty dollar tour schedule tshirt on the way out.” When I was younger I ALWAYS bought a shirt as a souvenir.  Now I am a bit more selective about it.  There are some that were well worth the $30 and I wear them all the time though!

It touches on Social Media as well which I think everyone should read!  And I was surprised to see that there was a Matt Wertz mention/inclusion on a section about making a mixed CD.  Love Wertz, didn’t realize too many people even know who he was!  There were also 2 John Mayer mentions… but one was making fun of his guitar faces 🙁  (He is making the notes with his face. Watch him closer. It’s actually really interesting to watch once you figure that out!)

And I also like the tip that women need to stop saying “I need to lose weight” in front of women fatter than you.  This is a major pet peeve of mine. Because if you’re thinner than me and you think YOU need to lose weight – then what the heck do you think about ME? That I’m a whale and need to lose even more weight?  I don’t know why women do this and I agree with the authors – It. Must. Stop.

Overall a fun read and a lot of good tips even if some were meant to be comical!

Do you know how to properly conduct yourself in a public restroom? What about while in the midst of a profoundly awkward silence? Have you perfected how to get out of helping your friend move?If you answered no to those questions, then you need Stuff You Should Know About Stuff, the book that future anthropologists will no doubt call “the Rosetta Stone of handling trivial life situations.”From the guys who created the viral videos “Sh*t Nobody Says” and “Things You Can’t Do When You’re Not in a Pool,” Tripp and Tyler bring you the written word in Stuff You Should Know About Stuff, a guide instructing you how to navigate the treacherous waters of life’s extremely trivial situations.There are even photos and illustrations for people who enjoy photos and illustrations and stuff like that. You can read it from cover to cover or you can choose to educate yourself only in conjunction with your bowel movements. Totally your call there.Stuff You Should Know About Stuff places the priority on the trivial experiences of life, because that’s where we spend most of our time; trying to recover from going for the fist bump when a casual acquaintance wanted a high five.