Book Review: Out of the Shoebox: An Autobiographic Mystery 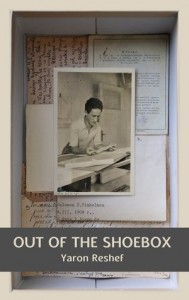 Out of the Shoebox was a great mystery – and best of all – it is a true story.  Yaron Reshef gets a phone call unexpectantly asking about his father who had passed away when Yaron was a child.  They ask him if he had purchased a plot of land with a friend and in order to claim it, Yaron would need to prove that it was indeed his father who purchased it by providing his address in 1935 as well as his connection to Mordechai Liebman.

Yaron then takes us on the journey that he took in order to try and uncover this information.  Most of his parents families were murdered during the Holocaust.  His mother is still alive as he begins the journey but not in the condition to be able to help him too much so he must rely on stories that his mother has told him over the years and his own research.

As the story unfolds it just becomes more and more interesting and of course the best part of it is that this is true and really happened. It’s hard for me to truly recap it, but I really loved reading it and uncovering this mystery with Yaron – which seemed to become more and more unbelievable and wonderful as the pages kept coming.

Did you ever get a phone call that changed your life?

That is what happened to author of this book.

A mysterious unexpected phone call hurls Yaron Reshef into an intensive two-year journey, during which he has to solve a mystery that took shape in the 1930s and gradually unfolded in the present. A mysterious lot, a forgotten bank account, a people long gone ”” along with their memory which were obliterated during the Holocaust. All of these rise to the surface, bearing with them memories and emotions previously hidden away in the shoebox.

Out of the Shoebox is a fascinating journal that reads like a detective story, comes across as an imaginative quest into the past, yet is the true personal story of the writer, Yaron Reshef.

“I had no intention of writing a book. I had no need to write a story in general nor a story about my family and the Holocaust in particular. But life being what it is, sometimes things happen in mysterious, even surprising ways. Stuff that used to take center stage moves to the background, and background stuff moves downstage and center. That’s what happened in my case.”
Yaron Reshef