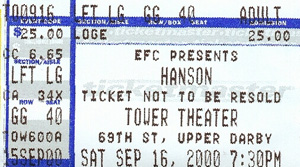 MMMBop
I Want You To Want Me

My 3rd Hanson concert and the first one out of state. I convinced my parents to take me because it was a Saturday and one of the only seated shows on this tour.  My mom, her friend and I all went to the show (but we had 3 single seats) and my dad, brother, and friend and their son went to see the Phillies. I remember the girls next to me asking me what the 2nd song was because it was a cover.  Since I was into setlists even back then (just wish I kept a file of all of them back then!) I of course was prepared for any cover they may throw out there.  I Want You To Want Me had to have been one of my favorite Hanson encores ever and I wish they’d add that song back into their catalog! (Zac sang lead and Taylor was on the drums)  After the show we exited near the bus and that was the first time I had seen my friend Marisa in person!

I’m not telling you where Hanson is now. Read some other blog posts to find out.

M2M actually dated Isaac and Zac for a bit during/after this tour.  They have since disbanded and both have solo careers. Marion Raven wrote a song about Zac, but titled it “Jack” that is sung by Pixie Lott.  Marit did a tour in the US not too long ago but I think for the most part they are active in Norway.