July 3, 2014 by ConcertKatie No Comments 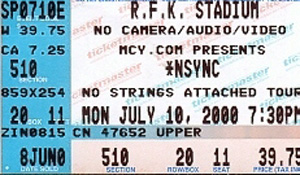 I know before this show it was raining and then I was super excited when Joey mentioned the fact that it was raining during the show. I think it was also this show when I decided it would be a super good idea to scream through Joey’s entire solo in “I Thought She Knew” (it wasn’t…)  We also got yelled at leaving – even though I was trying to get down the stairs with the help of my mom and her friend.  The stairs were TINY and had no railings so my mom yelled back at the guy that maybe if they had some railings I’d have been down the stairs already.   We were also SUPER high up and it was this tour where we learned the lesson to stop trying to get 8 tickets at once. (Which ended up in me being booted from “the group” on future tour trips)