And our final installment is from Matt Wertz with “Snow Globe”! 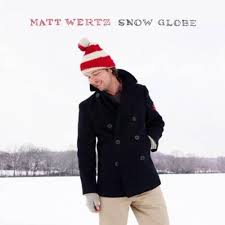 
Snow Globe is the recent Christmas CD from Matt Wertz.  In addition to the classics, it also contains the original song Snow Globe – for which the album was named – that was written by Wertz on January 3, 2011 at 4:32pm and is a super catchy tune that I have a feeling might be stuck in my head until Christmas… It also includes Christmas Just Ain’t Christmas (Without You) that was written November 30, 2010 at 2:33pm! (I love that Matt includes this information in his linear notes – or that he even keeps track of that kind of stuff in the first place.)  The other originals are Christmas in the City – written December 15, 2010 at 12:55pm and Wake Up, Wake Up, written January 27, 2011 at 5:15pm.

It also includes Tennessee Christmas – which is not a new song by Matt, but rather a cover of an Amy Grant song that I was not familiar with.  New to me, but maybe not new to you.

While his take on the classics is a more classic and typical approach, I found that the original songs give the CD that uniqueness that I was looking for.  I just got this CD in May, or I’d be kicking myself for not putting it in heavy rotation over the past couple of Christmas seasons. (I think it’s been out  a couple of years?) But I can certainly see some of these tracks getting added to heavy rotation in December! (I think it’s clear that I have going to have to make a Concert Katie Greatest Christmas Hits for this year because there are just too many Christmas CDs in my collection to listen to them all – unless of course I start now!)