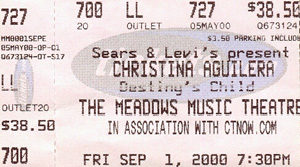 Before the show we stole a giant Christina banner off of one of the fences. Somehow I folded it up super tiny and it was on my wall for quite some time.  (I still have it too)  I can’t remember much about the first opening act, Sygnature.  I did love soulDecision (still do) and we walked by when their lead singer was getting in to a car after the show.  Destiny’s Child was pretty good from what I remember and Christina had a great set.

Christina Aguilera has been a coach on The Voice for several seasons and is going to be having her 2nd child soon.