July 4, 2014 by ConcertKatie No Comments 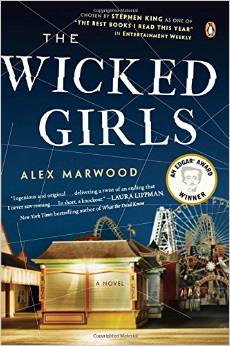 The Wicked Girls is a bit of 2 stories in one. And try as I might, I just could not get into the present day story. In fact, after getting about 1/4 through the book and deciding I just couldn’t focus on the modern day aspect of the story, I skipped the rest of it and instead went just to the parts from 1986 that were written in the book. Usually I try to tough it out and finish all the books I review, but with this one I just couldn’t. If it was one book just about what happened in 1986 – I would have loved it!

Back in 1986 2 girls – Jade and Bel – first meet. By the end of the day, a 4 year old that was left in their care is dead. The two older girls were charged with murder. Both girls are now out of juvenile detention centers and have resumed normal lives and new names. Even their significant others do not know about their past.

In the present day – Amber works at an amusement park where a woman turns up dead. Kirsty shows up to cover the investigation as she now works as a journalist. The two recognize each other as Bel and Jade. They had agreed to never see each other again – but here they are together once again. (And I’m not even really sure what ends up happening because I didn’t care to read enough to find out)

If you have more patience than me – you might enjoy both sides of this story.

Eleven year-old Jade and Bel met for the first time one summer day, a day that began innocently enough, but that ended in calamity: six-year old Chloe is found dead and Jade and Bel are charged with her murder. THE WICKED GIRLS, (A Penguin Original; $16.00; ISBN 978-0-14-312386-6; On sale: July 30, 2013; also available as an e-book) by Alex Marwood, follows the lives of these two girls, who will never be able to fully erase the events of that day and whose destinies are forever intertwined because of it.

Both women have tried to forget the horrific circumstances of their childhoods—Chloe’s death and the juvenile detention, isolation, and series of hard-knocks that followed it. Twenty-five years later, Jade and Bel have become Kirsty Lindsay and Amber Gordon, their true identities kept secret from their friends, families, and loved ones. Kirsty works as a journalist with two children and a loving husband. Bel, recently promoted at the amusement park in the seaside town of Whitmouth where she works, owns a house and lives with her long-term boyfriend. Neither has set eyes on the other since that fateful summer day.

But when a series of deadly attacks on women shakes the town of Whitmouth, Kirsty is sent there on assignment to cover the investigation. Amber and Kirsty, both entrenched in the growing turmoil, are forced to confront each other once again and to face the past that they have struggled so hard to hide.

As the Whitmouth murders escalate, Amber and Kirsty’s lives are threatened in ways neither could have foreseen, endangering the sense of normalcy that they have desperately struggled to maintain since changing their identities. As circumstances draw Amber and Kirsty closer and closer together, the two women are forced to make an incomprehensible decision that will cement their fates together forever.

Fans of the Academy Award-nominated film Heavenly Creatures and the novels of Rosamund Lupton and Chevy Stevens will appreciate the suspense of Marwood’s novel. Dark, fast-paced, and gripping, THE WICKED GIRLS will challenge your notions of right and wrong and leave you holding your breathe until the very end.

Alex Marwood is a pseudonym of a journalist who has worked extensively across the British Press. Marwood lives in South London and is working on her next novel.