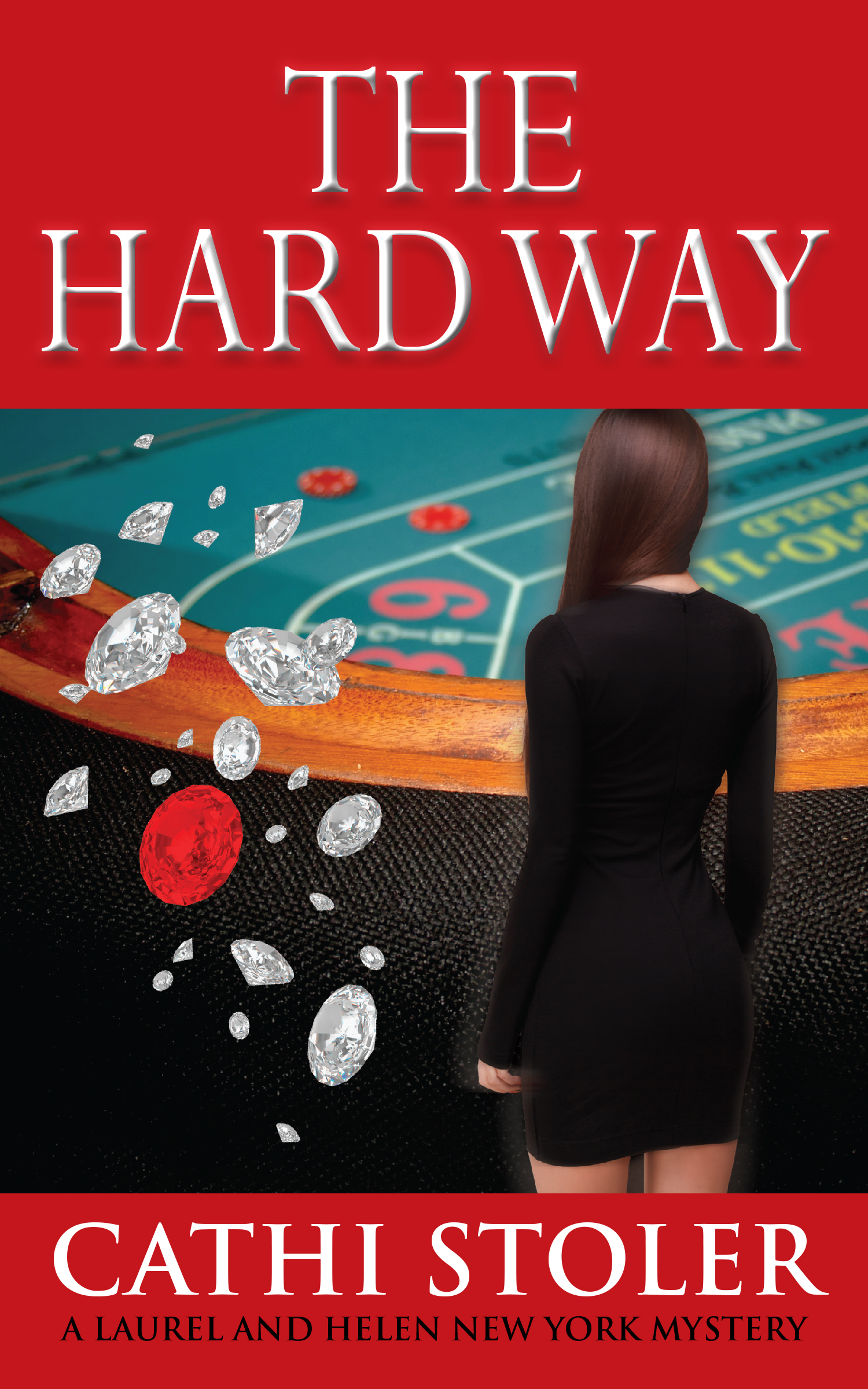 The Hard Way is actually the 3rd book in a series which features PI Helen McCorkendale and magazine editor Laurel Imperiole. I had not read the first 2 books in the series before reading The Hard Way and I don’t think that you have to either  – though I am considering going back and reading the other 2 now because I enjoyed this one so much!

The book starts with Helen and her boyfriend Mike visiting a new casino in Las Vegas called January that is run by one of Helen’s friends, Jimmy.  When she gets home, Helen tells Laurel about the casino and suggests that she do a getaway contest in her magazine, Women Now.

Things start to get suspicious when the woman who won, Dawn Chapman, claims that she did not enter the contest and doesn’t want the prize trip! The magazine’s lawyers say that the winner must go an alternate cannot be chosen, so Laurel somehow convinces Dawn to take the trip.

Shortly after arriving, Dawn goes white as a sheet and passes out.  Did she see something or someone she didn’t want to see? She wants to g home immediately – but Jimmy is doing this trip for publicity in the magazine and needs to try and get at least a few photo-ops with the winner! He convinces her to stick around a bit longer – but ends up finding her dead by the pool!

And then the fun starts. It turns out that Dawn is not Dawn after all and Helen, Laurel and Jimmy are determined to get to the bottom of what may be going on!

Laurel and her ex, Aaron, work on the case from New York City while Helen heads to Las Vegas to see what she can find and make sure that Jimmy is proven innocent.  Dawn was poisoned with Cyanide and diamond dust…

There’s a lot of drama that unfolds once we get into the investigation of what is going on. I don’t want to say too much because this was a fun read and I want you to check it out as well! There is a lot going on but I didn’t find it difficult to keep track – even with it bouncing back from different sides of the country.  There also isn’t a drawn line of who is “good” and who is “bad”  – some seem to switch sides and some may be both – so how can Helen figure out who to trust and who not to trust while she tries to get to the bottom of this? Her life could be at stake!

A quick and easy read – and a must read for anyone who loves a good murder mystery! A lot of twists and turns that kept me on my toes!

I received a free e-copy of this book in order to write this review and participate in the book tour. I was not otherwise compensated.

Private Investigator Helen McCorkendale’s childhood friend, Jimmy Scanlan, has just opened January, the most lavish casino and hotel resort on the Las Vegas Strip. After attending the grand opening, Helen returns to New York and encourages her friend, Laurel Imperiole, Senior Editor at Women Now magazine, to create a get-away contest for readers offering a weekend at the hotel as the grand prize. The winner, Dawn Chapman, a jewelry store employee from Cincinnati, denies entering the contest and initially refuses the trip. Finally persuaded by Laurel to accept, she arrives at the hotel and nearly faints when she passes the hotel’s elite meeting rooms where the International Diamond Dealers Consortium is holding its annual meeting. She insists on returning home immediately.

Suspicious of her behavior, Jimmy visits her suite to encourage her to attend the Saturday afternoon pool party, saying she can leave on his private jet the next day. Later in the afternoon, he finds Chapman’s dead body by the pool. She’s been murdered—an unusual double poisoning by cyanide and diamond dust.

Dawn Chapman was not who she appeared to be, and therein lies a mystery. But to Helen and Laurel, the main task is to take Jimmy Scanlon off the suspect list and clear his name. Will their luck hold? Or will it be a crap shoot, as they roll the dice and do it ‘the hard way,’ going for doubles when the odds are against them. Losing may mean losing their lives.

Cathi Stoler’s mysteries feature PI Helen McCorkendale and magazine editor, Laurel Imperiole. The Hard Way is the third book in the series. The first, Telling Lies, took on the subject of stolen Nazi art. Book 2, Keeping Secrets, delved into the subject of hidden identity. Stoler’s short stories include: “Magda,” in the Criminal Element Anthology Malfeasance Occasional: Girl Trouble, “Out of Luck,” in the Anthology, Murder New York Style: Fresh Slices, “Fatal Flaw,” a finalist for the Derringer for Best Short Story and “Money Never Sleeps” both published at Beat to A Pulp. Cathi is working on a novella, Nick of Time, which features International gambler, Nick Donahue. She is also starting a new series, Bar None, A Murder On The Rocks Mystery, with female bar owner, Jude Dillane. Cathi is a member of the New York/Tri State chapter of Sisters In Crime. She is also a member of Mystery Writers of America.