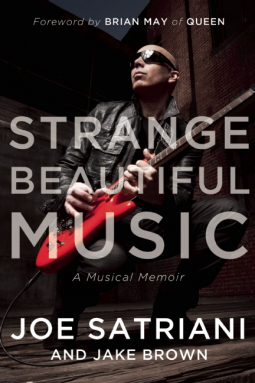 Strange Beautiful Music is a memoir by Joe Satriani. The book tells about his life growing up, how he got his first guitar and what got him interested in being a musician. Throughout the book there are also some in sets with information from others who were around at that time giving their take on what happened, which I thought helped round things out a bit.  The rest of the book is a bit too detailed and while interesting was almost a bit MORE than I wanted to know or expected to find out when I picked up the book.  If you’re a fan of Joe’s, then maybe you will appreciate this detail more than I did.

The end of the book also has a section called “The Gear: Album by Album”, if you’re really into music and gear then this is the chapter for you – lots and lots of detail on everything that was used for every album and EP that Joe released.

Go behind the scenes with the musician The New York Times called “a guitar God!” Oft-hailed as the Jimi Hendrix of his generation, living guitar legend Joe Satriani has long transcended stylistic boundaries with a sound that raises the bar like a new horizon for the broader genre of instrumental guitar rock. Joe’s 6-string secrets have astounded listeners around the world for nearly 30 years.In Strange Beautiful Music: A Musical Memoir, Satriani and coauthor, music biographer Jake Brown, take fans on their first authorized tour of the story behind his climb to stardom and the creative odyssey involved in writing and recording a storied catalog of classics including “Surfing with the Alien,” “Summer Song,” “Satch Boogie,” “Always With Me, Always With You,” “The Extremist,” “Flying in a Blue Dream,” “Crowd Chant,” and more.Featuring previously unpublished photos and hours of exclusive, firsthand interviews with Satriani, Strange Beautiful Music offers a unique look inside the studio with Joe, giving fans a chance to get up close and personal like never before. With insider details about his collaboration with multi-platinum supergroup Chickenfoot, exclusive interviews with Sammy Hagar and Michael Anthony of Van Halen and Chad Smith of the Red Hot Chili Peppers, commentary from fellow guitar legends such as Steve Vai, Metallica’s Kirk Hammett, Primus’s Larry LaLonde, and legendary music producers including Glynn Johns and the late Andy Johns, this memoir offers a rare inside look for die-hard Satriani fans, guitar enthusiasts, and anyone who loves to rock