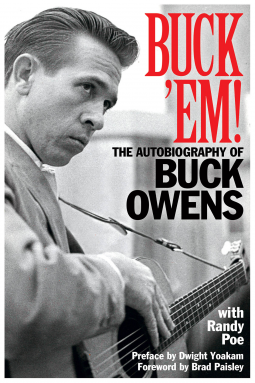 Buck ‘Em is the autobiography of Buck Owens.   While Buck passed away in 2006, he started working on his autobiography in the 90s.  He started recording on to cassette tapes for hours and hours and hoped that one day he could work with an author to turn it into his autobiography. Unfortunately his health began to decline before he could get any further than recording the tapes.  The author, Randy Poe, met with Buck’s son, nephew and former Buckaroo band member to ask about writing an authorized biography.  Once he saw all the tapes that were recorded the authorized biography turned into an autobiography.  Poe notes in the “background” section of the book that while he had hundreds of hours of tape, piecing things together would be difficult as the story of Buck’s birth did not come until tape 21!  Buck talked about whatever he wanted to on each of the tapes and they weren’t in chronological order.  Though Poe also notes that Buck had a great memory – remembering venues and details about trips on the road from years ago.  Comparing the tapes to an archive of Buck’s tour dates, Poe realized that Buck had remembered  everything exactly correct.  While Poe pieced everything together, the real author of this autobiography, as it should be, is Buck Owens.

Since  this book is comprised of material from tapes, you really feel like you are sitting in a room with Buck and he is telling you stories.  Stories of his birth, getting signed to a record deal, touring, etc.  While there are quite a few chapters in this book (100+! split into 7 parts), they are mostly very short just a  couple of pages each.  Hats off to Poe for being able to go  through all these tapes and piece things together in chronological order! I can only imagine how overwhelming that might have been – especially with Buck having passed and unable to be there to help out.

Buck led quite a life – even up until his final moments. He was not going to perform with the Buckaroos on March 24, 2006 and as he was leaving to head home he bumped into a couple that had driven quite a distance to see him.  So he decided to turn back around and perform anyway.  He played for an hour and a half (very impressive when he wasn’t feeling up to playing just hours before!) and received his final standing ovation.  He passed away in his sleep over that night into the next morning.

I don’t know much about country music or their legends – but I certainly feel like I know Buck Owens now after reading Buck ‘Em!   I always find it fascinating to read about touring and the music industry from years past.  It is amazing how different everything is now (and probably not for the better).

Buck ‘Em! The Autobiography of Buck Owens is the life story of a country music legend. Born in Texas and raised in Arizona, Buck eventually found his way to Bakersfield, California. Unlike the vast majority of country singers, songwriters, and musicians who made their fortunes working and living in Nashville, the often rebellious and always independent Owens chose to create his own brand of country music some 2,000 miles away from Music City – racking up a remarkable twenty-one number one hits along the way. In the process he helped give birth to a new country sound and did more than any other individual to establish Bakersfield as a country music center.

In the latter half of the 1990s, Buck began working on his autobiography. Over the next few years, he talked into the microphone of a cassette tape machine for nearly one hundred hours, recording the story of his life.

With his near-photographic memory, Buck recalled everything from his early days wearing hand-me-down clothes in Texas to his glory years as the biggest country star of the 1960s; from his legendary Carnegie Hall concert to his multiple failed marriages; from his hilarious exploits on the road to the tragic loss of his musical partner and best friend, Don Rich; from his days as the host of a local TV show in Tacoma, Washington, to his co-hosting the network television show Hee Haw; and from his comeback hit, “Streets of Bakersfield,” to his induction into the Country Music Hall of Fame.

In these pages, Buck also shows his astute business acumen, having been among the first country artists to create his own music publishing company. He also tells of negotiating the return of all of his Capitol master recordings, his acquisition of numerous radio stations, and of his conceiving and building the Crystal Palace, one of the most venerated musical venues in the country.

Buck ‘Em! is the fascinating story of the life of country superstar Buck Owens – from the back roads of Texas to the streets of Bakersfield.