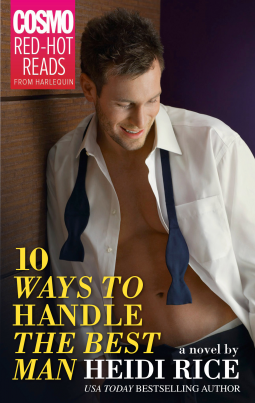 10 Ways to Handle the Best Man is the story of Sabrina – who is organized and keeps lists of everything, being the maid of honor in her BFFs wedding.  It turns out that her BFF asked her brother to have his half-brother be the Best Man, simply in hopes that he and Sabrina would hook up.  Sabrina is not interested in this idea at all, Connor McCoy is nothing but trouble!  At the rehearsal dinner, Connor slips his hand up Sabrina’s leg and she is convinced that everyone is watching her.  Maybe only BFF noticed though – and even she isn’t sure of what she is seeing.  Sabrina makes him stop but then only wants him more.  They end up making plans to meet up after the wedding and Connor thinks that everything is going to go HIS way.  Except that soon he realizes that Sabrina has a bit of a hold on him and gets him to break even his own rules on what is going on.

I really liked this story. It was a Cosmo Red-Hot Read so it was short and quickly gets to the “good part” of the story.  It did seem a little bit reminiscent of 50 Shades of Gray at points but that really wasn’t a problem.  Although the ending was a bit open-ended, it didn’t leave me absolutely needing to find out what happened next, I did have some closure though there was a bit of curiosity too to see how their relationship (or lack there of) would evolve.

The maid of honor’s to-do list for handling the best man:

#1 Charm him.
#2 Find out everything about him from friends and family.
#3 Size definitely matters: especially when it comes to the ego. Tread carefully if he has a big one….

Sabrina Millard has a plan and a list for everything, including her role as maid of honor at her BFF’s wedding. The best man is a whole different matter. She knows Connor McCoy is trouble—she once had a disastrous encounter with him years ago. Now that he’s supersexy and supersuccessful, it’s even worse. Especially as he’s just proved who’s in charge by shattering her legendary control…under the table at the rehearsal dinner!

Connor’s having fun seducing prim Sabrina. Which is so wrong—she’s the ultimate good girl, while his past is…complicated. Only Sabrina has him breaking all his own rules….