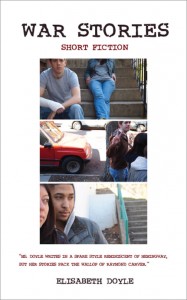 War Stories is a compilation of short stories, coming in at just over 100 pages.  There are 9 stories, each with different characters and a different war that they are recovering from. Some are wrapped up in drugs, others were fighting in an actual war.

Each story is moving in its own way and you can probably find at least one of the many characters that you relate to.  The way the book is set up you can either read through all the stories at once, or if you’d like, put down the book and keep coming back to it to read a story a day or every few days.  Each short story is its own entity. The stories are fiction – but these could just have easily been real biographies of real people. The stories are real.

Many people tend to think it is easier to write a short story than a novel, but I disagree. In a short story you only have a few pages to get the entire story out there and be able to capture the reader, make them feel for the characters, know their back story, etc.  A lot of authors can miss out on doing this because they just focus on the story at hand, and give us no detail to the characters. I think that Elsabeth Doyle, the author of this book, completely hit the mark with all the short stories.  I could picture all the characters and the surroundings and felt like I was in the stories – even if some of them were only a handful of pages long!

I received a free copy of this book in order to write this review. I was not otherwise compensated and all opinions are my own.

We all carry our own battle scars.

This is the premise of War Stories, a rich collection of short fiction that draws upon both the literal and figurative meaning of its title. Through a diverse array of characters, settings, and circumstances, War Stories delivers a series of powerful tales from the home front of war: the stories of parents, siblings, and spouses of those who have fought, as well as those who have returned from battle.

Set against the backdrop of contemporary conflicts, War Stories’s compelling nine narratives tell of a wounded veteran who seeks renewal through an imagined relationship with a neighborhood girl, a grieving father who finds peace and reconcillation at the site of a disastrous bus crash, a young woman who searches for identity and meaning in the wake of her husband’s injury, and an urban teenager engaged in a fateful standoff with local recruiters. Interspersed with these tales are powerful, non-traditional “war stories” – of youth, unexpectaed loss, and heartbreaking love.

Elisabeth Doyle is a writer and attorney living in Washington, D.C. She studied fiction writing at Sarah Lawrence College and the University at Albany, and is completing a Masters of Laws Degree at Georgetown University Law Center. Ms. Doyle’s short fiction was published in the literary journal Nadir and was awarded the University of Albany’s Lovenheim Prize for best short fiction. Her first short film, Hard Hearted One, was admitted to the Philadelphia Festival of World Cinema and the Street Films Film Festival, and was shown on Public Television and Manhattan Cable. War Stories is her first collection of short fiction.