September 11, 2012 by ConcertKatie No Comments 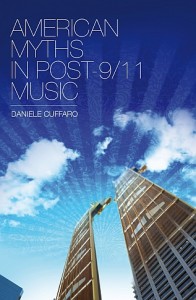 American Myths in Post 9/11 Music was definitely an interesting read. It is a series of essays that discuss different types of music and how the attacks of September 11th had inspired or changed the music as well as myths surrounding this.

A lot of the book focuses on Bruce Springsteen’s Album “The Rising”, it also features a chapter on Country Music (as well as others).  The book definitely makes you think which I liked.  Although I can’t say I was all that familiar with some of the songs / albums mentioned.  I will definitely be looking in to them though and perhaps re-reading the book after (or while) I have listened to the songs, I think it will have that much more of an impact on me if I do.

Obviously with such a huge tragedy and attack, American culture was forever changed.  To see it in a music focused book was definitely interesting for me, because I never really thought about things that way.  Obviously it inspired many people in many ways, but I never really stop to think about those types of things – until now.

This is a relatively short book – just under 100 pages – but is very text heavy.  It is definitely worth the read if you are looking for something a bit heavier and interesting about the attacks of September 11th and the way it influences myths and music.

After September 11, 2001, the void left following the attack on the Twin Towers in the heart of New York was the visible symbol that there was to be a breaking point with the past. The attacks dramatically changed the everyday lives of the American people and the new devastating landscape led people to seek to restore the certainties that had been so suddenly shattered. In doing this, Americans went back to the historical myths in their culture.

This book explores the collective memory and historical American myths like, for example, the myth of the innocent nation and the frontier myth, and shows how some of these nationally considered historical truths have not disappeared, but were indeed exhumed in the music produced post-9/11.

“the author ignites the memories, relights the fire within all of us to remind us of that day … that we must not, nor will ever, forget.” Fran Lewis

The Author: Teacher, journalist and archivist, Daniele Cuffaro has an MA in English and Italian Literature. He is also a musician and a composer for the folk band The Vad Vuc.