February 14, 2012 by ConcertKatie No Comments 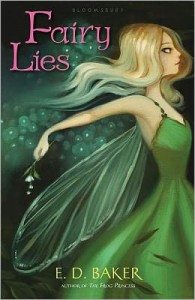 Fairy Lies is a book by E. D. Baker.  It is actually a sequel and I must admit I was a bit lost in the first couple of chapters, but then I was able to catch on to what was going on. I’m going to assume the other characters were explained a bit better in the book before and that’s where my confusion came from.

Tamisin is a fairy princess – the book has a lot of interesting sci-fi characters – fairies, mermaids, gargoyles and even unicorns which made it a bit more interesting than if was a regular princess that was kidnapped – that’s for sure.  I also enjoy reading books that take me to a different land than where I live – it lets my imagination go wild!

Tamisin’s boyfriend Jak finds out from some other fairies that Tamisin has been kidnapped and goes to rescue her.  He is afraid that there may also be a war, so he must find her and quickly.

Fairy Lies is going to be released in February 2012 and I would definitely recommend it for any young adult readers in your life who enjoy books dealing with the supernatural.

If you think that the king Oberon, Titania & Botton are names that sound familiar – it is because William Shakespeare’s A Midsummer Night’s Dream was the inspiration for Fairy Lies and the prequel Fairy Wings.

Sparks fly when this fairy princess is kidnapped!

In this delightful sequel to Fairy Wings (originally titled Wings) the fairy princess Tamisin has been kidnapped from her home in the human world by Oberon, king of the fairies, who thinks he’s her father. When Tamisin’s boyfriend Jak finds out, he sets off to rescue her. In this funny and heartwarming romp through a land of fairies, goblins, sphinxes, unicorns, and many more, Tamisin and Jak try to regain their romance even as they find their way back to the human world.

E. D. Baker is a master of the madcap world of magical creatures and she demonstrates once more that a clever girl who shows a dose of kindness, humor, and common sense can overcome almost any fearsome foe, no matter how magical!

E. D. Baker is the author of The Wide-Awake Princess and the highly successful Tales of the Frog Princess series, the inspiration for the Disney blockbuster “The Princess and the Frog.” She lives with her family in rural Maryland.

I received a free copy of this book to read from the publisher through NetGalley.  I was not asked to write a favorable review.  All opinions are my own.