December 8, 2011 by ConcertKatie No Comments 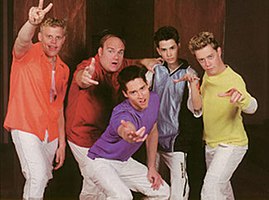 In High School, my favorite boyband was 2gether.  Sure I was a huge NSYNC fan as well, and an on and off Backstreet Boys fan, and known to wear retro New Kids on the Block shirts every now and then and sometimes randomly burst out in to O-Town songs in the hallway…. but 2gether was my absolute favorite.  I’m not sure why, because they were a “fake” band put together by MTV to MOCK the boyband phenomenon, but they ended up catching on and besides being a mockumentary movie they also got their own TV show.  Unfortunately the TV show ended abruptly after the death of youngest member Michael Cuccione (who played Jason “QT” McKnight)

Recently, Alex Solowitz (who played Mickey Parke) posted on his Facebook page that he had lunch with Kevin Farley (who portrayed Doug Linus) and that they had discussed getting back together. (2gether?)  They called up Noah Bastian (Kevin’s TV brother Chad Linus) and he was on board too. All that was missing was Evan Farmer (heartthrob Jerry O’Keefe) and he was away.  Once he came back, he was on board as well.

The only problem – was MTV on board?  Could they do something without MTV being on board and still use the 2gether name and songs?  The guys want to reunite for a “final” show in LA, with proceeds from the show going to the Michael Cuccione Make A Difference Foundation.  Of course, I’d like for them to do a show on each coast – Los Angeles and New York City because I’m not sure how I’ll figure out how to get out to Los Angeles for a one-off show.

The guys through their facebook and twitter pages have tried to get fans to rally and let them know that we want 2gether back!  There have been twitter trending attempts, posting on MTV’s website, facebooks and twitter pages and contacting whatever news outlets we can.

A LOT of news outlets picked up on things early on and more recently MTV has posted about “2gether reuniting?” We want the ? changed to a ! “2gether reuniting!” with MTV on board – maybe in conjunction with a  re-release of 2gether the movie on DVD (Which has sold on ebay for upwards of $100 when it appears, due to it going out of print so quickly) and the series on DVD. (It is only a few episodes but I can’t find my recordings of it so this on DVD would make me very very happy)

I even started up my old 2gether website again… so if you are a fan of 2gether and want to be kept up to date on the reunion progress as well as some of the projects the guys have been working on as well – be sure to check out www.2gethergalaxy.com!