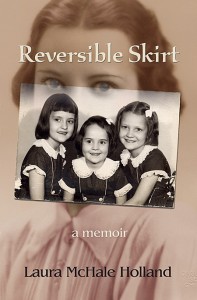 When the mother of three little girls commits suicide, their father wants more than anything to keep his family together. He remarries in haste and tells his daughters his new wife is their mother. The youngest, Laura, believes her mother must have gone through a kind of magical transformation.
Reversible Skirt is written from Laura’s perspective as a child sifting through remnants of her mother’s existence and struggling to fit into a community where her family’s strict rules are not the norm. When Laura’s father dies, her stepmother grows increasingly abusive, which propels Laura and her sisters into a lasting alliance. Their father’s wish that they stay together comes true, although not in the way he’d imagined. 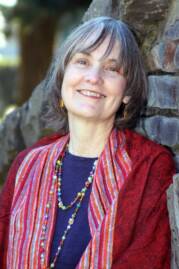 Laura McHale Holland is a writer, editor and occasional storyteller living in southern Sonoma County. Her award-winning memoir, Reversible Skirt, was recently released by Wordforest, and her short fiction has appeared in The Best of Every Day Fiction Three, as well as the 2009 and 2010 Vintage Voices anthologies. She has also been a feature writer for such local publications as NorthBay biz, the Noe Valley Voice, and the original San Francisco Examiner. She is posting new flash fiction weekly in 2011 athttp://lauramchaleholland.com.

I was captivated by this story.  A young girl who doesn’t realize that her mother had committed suicide and assumes that the woman that she has been told by her father is her mommy, is in fact her real Mommy. However, it turns out that she is just an evil stepmother who does not particularly enjoy the company of children (and she now has 3 step-daughters).  She ends up piecing together that her mother had committed suicide when she was 2 years old and a lot of what happened that she thought had just been dreams about her mother were actually reality of when her and her sisters discovered that her mother had hung herself after coming home from a Halloween party.  At eleven her father passes away and now her and her sisters are forced to be only in the care of this stepmother who is absolutely horrid to them.  I had thought that they might try to run away from home – but instead they put up with this woman until they were old enough to head out on their own.  Even then, they would still return for visits.

As horrible as a childhood Laura had, it seems that she has now grown up to be a well adjusted adult – and even a step mother to two sons.

I received a free e-book copy of this book in order to post this review from author blog tours. All opinions are mine and I was not otherwise compensated for a favorable review.