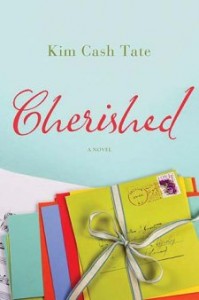 I was drawn to the book Cherished by Kim Cash Tate because it is about someone who dreamed of being a songwriter.  I figured with the musical aspect of it, it would be able to keep my attention.

I’ll be honest, it took me a bit to actually get in to the book. There were a lot of characters and in the beginning it was rather overwhelming for me.  A couple of times I read 1 chapter and then put it down – unsure if I’d be able to get through it.  However, once I picked it up and “forced” myself the continue reading it was easier to figure out who was who and follow along a bit better. In the end, I quite enjoyed the book.

The main character is Kelli who made a few difficult decisions in her life and wasn’t sure what God wanted her to do with her life.  It is once she is reunited with an old boyfriend that these things start to come in place for her.  Brian, her ex, is now a Christian Rapper who is pretty successful under the name of “Alien”.  Brian and Kelli work together on his new album after working through some of the issues they had previously with their relationship.

There are also other stories included with some of the other characters – the next most important one being Heather.  She was also looking for God to help her out and guide her on where she should be going with her life after a few not so great decisions.

I am now intrigued by the fact that there might be Christian Rappers out there. Christian is not usually a music genre I listen to, but I might have to check out some Christian rappers to see how that all works out – since usually rap is associated with things that are, well, not Christian.

Also interesting – at the end of the book there is an ad for Da’ T.R.U.T.H’s song “Cherished” which features CeCe Winans that was inspired by this book! Looks like I have something else to look in to as well after reading 🙂

How can she believe God cherishes her when she can’t forgive herself?

Kelli London once dreamed of being a songwriter. As crazy as it seemed, she hoped that God would use the lyrics that came to her while she slept. She dreamed about Brian too, that the love they shared would be a forever kind of love. But choices she’ll forever regret upended her hope . . . and turned her dreams to dust. When those dreams come knocking once more, she’s forced to deal with the pain of the past.

Heather Anderson’s life has spun out of control—first, an affair with a married man, then a one-night stand with the drummer of a popular Christian band that left her devastated. Broken and alone, she cried out to the only One who can save her. And He did. But that’s just the beginning, because now she must leave behind the only life she’s ever known.

Two women with shame-filled pasts form an unlikely friendship. What does God’s forgiveness look like for them? Will they ever believe that He loves them . . . and can still offer them a life where they are cherished?