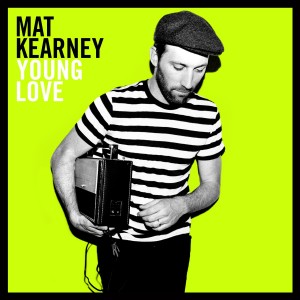 Mat Kearney’s CD “Young Love” was released on August 2, 2011. The first single, “Hey Mama”, is also the first track on the album.  Young Love is Mat’s 3rd full length release – and if you are a Grey’s Anatomy fan you are probably familiar with some of his older songs even if you don’t think you are! A couple have been featured in their episodes and he’s also had songs in some other TV shows as well! All of the songs on the album are either written or co-written by Mat.

The album is really catchy. After listening to it practically all day to properly review it – I found that I had a hybrid of 2 or 3 of the songs stuck in my head the next day!  (Hey Mama, Ships in the Night and Young Dumb and In Love if you are curious!) Usually it is just 1 favorite that gets stuck – so that kind of shows you just how much I loved this album. Another great thing about this album is that there is not one song that I dislike enough to skip it. Most of the other albums I’ve gotten lately there are a couple songs that I just can’t sit through. Not the case with Young Love. I also like how the theme of Young Love carries throughout the songs on the CD.

Mat is heading out on tour beginning September 14th – be sure to check him out if he comes to your area! Dates are under the cut!