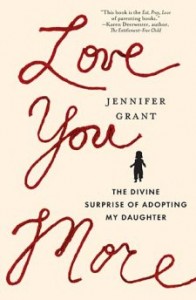 Love You More is the story about how Jen Grant and her husband David adopted their fourth child, Mia.  It tells a bit about their early married life in Brooklyn, NY and how Jen had always longed for her children, even before she had them. Jen and David had 3 children that were biologically theirs, all 2 years apart, before they considered adoption.

Their life story continues with the waiting they had to do before they added another piece to their family puzzle with Mia – who was adopted from Guatemala and was added to the Grant house just after her 1st birthday.

While some families choose to keep their adoption secret – the Grant’s let their 3 children – Theo, Ian and Isabel – know all about the adoption process and told Mia from when she joined the family that she was adopted and explained how she had a different “tummy mommy” than her brothers and sisters.  Since Mia was from Guatemala, her skin was dark like chocolate and her hair black like licorice so it was rather obvious when she was out with her brothers and sisters that she was adopted and often had to put up with comments about how she “didn’t match”

I have thought a lot about adoption as an option for having children, so I enjoyed reading this book and following this families story on how everything works out with not only getting to adopt the child, but how to try and help them adjust to the new family once the adoption has been finalized.

Following the invisible thread of connection between people who are seemingly intended to become family, journalist Jennifer Grant shares the deeply personal, often humorous story of adopting a fifteen-month-old girl from Guatemala when she was already the mother of three very young children.

Her family’s journey is captured in stories that will encourage not only adoptive families but those who are curious about adoption or whose lives have been indirectly touched by it. Love You More explores universal themes such as parenthood, marriage, miscarriage, infertility, connection, destiny, true self, failure and stumbling, and redemption.

In Love You More, Jennifer describes the way she feels God has brought her family together and completed it with the adoption of her daughter.

Jennifer Grant is a journalist whose columns, feature stories, and blog posts have been published in Sun-Times Medianewspapers, Christiantiy Today, her.meneutics (Christianity Today’s blog for women), and adoption.com. Jennifer writes a column for the Chicago Tribune. She is a member of the National Society of Newspaper Columnists and is a founding member of Redbud Writers Guild. Jennifer lives in the Chicago suburbs with her husband and four children and has expertise in throwing parties, traveling light, and daydreaming.