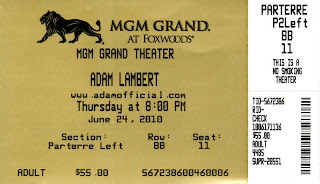 As I had previously mentioned, our seats for the show were great and I think it is the closest I have ever been at a show at this venue!

Allison was out first, and did a relatively short set. She did a great job in the short time she had though.  For “Don’t Waste The Pretty” she was joined by Orianthi on the guitar.

Next up was Orianthi’s full set, and while I don’t know that she is the best singer out there – her guitar skills more than made up for that.  I thoroughly enjoyed her set, although it did seem to be a couple of songs too long.  Apparently the women behind me felt the same, but rather than keep it to themselves to blog later (as I did) they had to yell and scream after her last song that they hoped she was done and getting off the stage.

It was the commentary of the women behind me that led to me busting out the heavy duty earplugs for a second night in a row.  And my mom even asked for some of the other disposable earplugs I had, but then told me that they didn’t work at all.  I wasn’t very surprised though, as I could loud and clearly understand he commentary throughout Adam’s entire set and I don’t even want to think about how loud these women were without earplugs.  I mean, is a running commentary really needed? The all amazing Adam Lambert is on stage – take it all in ladies!

At first, we weren’t going to stay for Adam’s set at all.  Then it was.. well maybe we’ll give him a chance of a couple of songs.. to.. well we’ll see how much of it we can take… but we ended up staying for the whole set.  (We were already there, why not)

I must say I really enjoyed it.  There was minimal screeching, which was good.  I hate that and I do think he has a great voice when he is just singing. (Which I had the pleasure of hearing at 6am at the Today Show soundcheck last year!)  The screams/screeches seemed to be fit into the songs in a place where they almost belonged and weren’t all over the place and annoying.  Of course until the end of the set, during the encore when he seemed to screech for a couple of minutes straight..

The show was very theatrical, which was to be expected.  He had 4 dancers and occasionally he danced with them and the boy has moves.  This show combined with Bieber’s dancing the night before made me realize just how much I missed boybands and their shows. (NSYNC reunion now please?)

Adam’s set was just over an hour – with the whole show running about 3 hours with all the set changes.

Another item worth noting – a woman a couple of rows in front of us had a baby doll she was holding in the air for all the sets.  I noticed it during Allison’s set and it gave me a laugh.  When the lights came on we realized it had on a little leather vest and then at one point she turned it around and it had on eye makeup! We decided it was a baby Adam and her waving it around during the show was almost as entertaining as the show on the stage in front of us.

Overall, it was a great show and I would recommend it – though it seems like the majority of his tour is sold out so you might have to resort to entering contests to get in!