June 8, 2021 by ConcertKatie No Comments 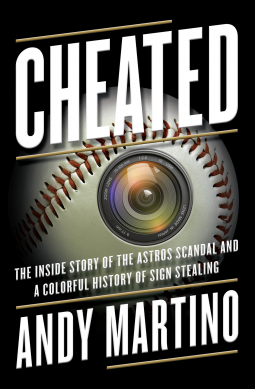 When I started this book I was not expecting to be so conflicted about the cheating going on in Major League Baseball.  I was also not expecting so many Mets and former Mets to somehow be involved in this story.  It seems easy – if you are relaying signs to the players on your team using trash cans or buzzers – you’re in the wrong and should be punished.  But then I realized just how much sign stealing is really going on in the game – and if you as a player crack the code – where is the line? Do you share with your teammates? Use it only for yourself? Keep it to yourself completely? A lot of that is unraveled in this book with how it started for some of the players involved and how it expanded to the big controversy with the Astros in more recent years.  In addition to mentioning the recent cheating – it goes back historically – and it has pretty much been going on since the dawn of time.  This was definitely an eye opening book and I think that doing it in the way the Astros did was above and beyond for the love of the game – but I haven’t been able to figure out where exactly I draw the line.  Maybe after reading it will be a bit clearer for you, or maybe not!

By the fall of 2019, most teams around Major League Baseball suspected that the Houston Astros had been stealing signs for several years. The Astros had won the 2017 World Series and made the playoffs the next two seasons. All the while, opponents felt that Houston’s hitters knew what pitches were coming.

In Cheated, award-winning sports reporter and analyst Andy Martino takes readers behind the scenes and into the heart of the events that shocked the baseball world. With inside access to the people directly involved, Martino not only breaks down exactly what happened and when but reveals the fascinating explanations of why it all came about. The nuance and detail ofthe scandal reads like a true sports whodunnit. How did otherwise good people like Astros’ manager A. J. Hinch, bench coach Alex Cora, and veteran leader Carlos Beltrán find themselves on the wrong side of clear ethical lines? And did they even know when those lines had been crossed?

Martino also explores the colorful history of cheating in baseball, from notorious episodes like the 1919 “Black Sox” scandal all the way to the modern steroid era. But the Astros scandal became one of the most significant that the game has ever seen—its fallout ensnaring many other teams, either as victims, alleged cheaters, or both. The Los Angeles Dodgers felt robbed of a World Series title and fended off accusations about their organization. Same for the New York Yankees. The Boston Red Sox were soon under investigation themselves. The New York Mets lost a promising manager before he had ever managed a game.

With skillful reporting, Andy Martino, who has broken numerous stories about the Astros and sign-stealing in baseball, fills in all the pieces in a riveting investigative narrative. Cheated is an explosive, electrifying read.