December 21, 2020 by ConcertKatie No Comments

Early December Hanson continued their Cain’s Ballroom residency with a series of Christmas themed concerts. With the coronavirus spiking, I was a little bit hesitant to be there in person, but we took all the same precautions and also limited our time maskless outside (eating).  Going into the shows there were 4 songs I was hopeful would be played – Happy Christmas as they managed to play it only on the Finally it’s Christmas tour at shows I was not at (and I did a majority of them!), My Favorite Christmas Sweater as they only did it several years ago and never when I was there, Christmas Ball, a song never previously played but the name of the concert series and the Silent Night Medley for my friends who didn’t manage to see it on the Finally It’s Christmas tour.

The trip got off to a bit of a rocky start – 2 of us were supposed to land first, with the 3rd of us arriving just about an hour later and the rental car was in her name.  With about 20 minutes left of waiting at the airport – we get word that she had been diverted and had no idea when she would be arriving.  Fortunately, the car rental place was good about switching things into my name instead.  We had tickets to the Festival at the Philbrook that evening, so we anxiously awaited to hear when our friend would be arriving and if we’d have to try and adjust those tickets or not.  Fortunately after the diversion she got on another plane and ended up only about 3 hours late. (“only”)  However – in the time it took for us to get to the room and decide we wanted food – the elevator at the hotel went out. I decided I would go down the stairs once – to get out – and then we would stay out as long as possible in hopes that it would be back up and running upon our return.  It wasn’t fully running when we got back, but they managed to have a work around at least so we didn’t have to do the stairs back up (this time with our friend and her luggage!)  The hotel bathroom also seemed to be flooding from the room above us and when we were packing to get ready to leave, the power went out for just a couple of minutes. Thank goodness – because down those stairs with luggage was NOT going to be fun.

The Festival at the Philbrook was so pretty. They had a constant changing set of lights on the building and we wandered around checking it out from every angle.  We also got to see Santa and make s’mores!  In addition we opted to add the “take and make” to our tickets which was a sky gem – but decided to take them all the way home first as we weren’t sure how the finished gem would handle being packed in luggage.  After we left, we drove around some of the nearby neighborhoods to check out their Christmas light displays! 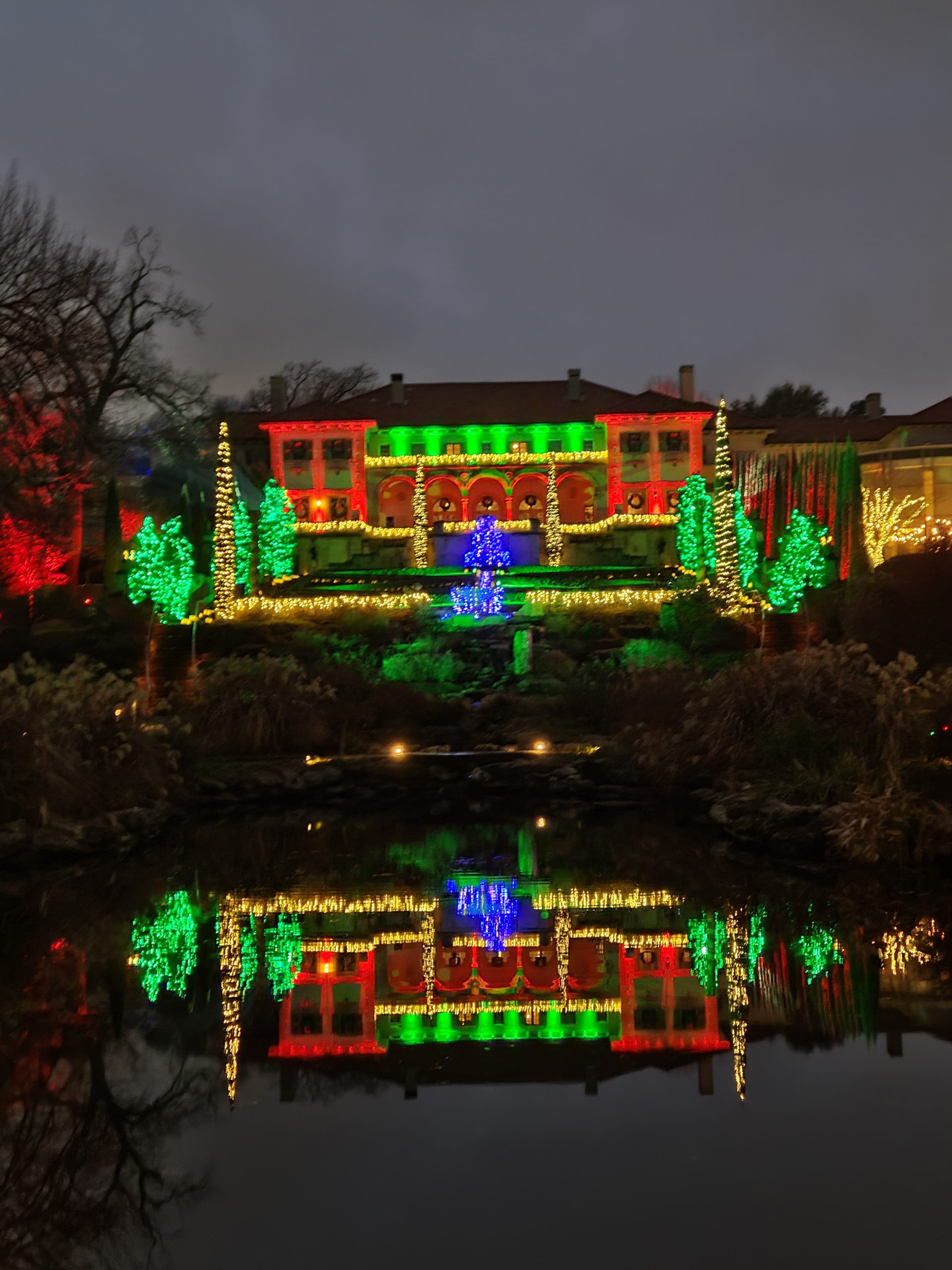 With temperatures getting colder, we spent a lot more time in the hotel than out and about exploring.  This also included getting our table decorations ready for each night of the show.  We had on Holly, a menorah (as one of our table mates is Jewish so we needed proper representation!), snowman who changes color when you bopped him on the head and some stockings with our and some of our friends who couldn’t make it to the shows names on them. Not knowing how long it might take us to set things up, we tried to get to Cain’s for doors – only for everything to be running about 30 minutes behind.  And did I mention, it was COLD? (Just about as cold in OK as CT which is not the norm.) Decorating ended up taking about 15 minutes and we modified it slightly for the shows the next day.  I wasn’t sure if the show was going to be 100% Christmas or a mix – and was pretty convinced it would be a mix so I was pleasantly surprised when it was 100% Christmas songs.  We took a photo of the setlist before the show, friends did not want to be spoiled but I skimmed looking for the songs I wanted to hear.  With so many songs having “Christmas” in the title – I completely missed that the 2nd song said “Christmas Ball” and so even though I looked at the setlist beforehand I was still confused and surprised when they started playing it.  For the first show we went for “funny” but the guys went for “dressy” – I guess we should have consulted each other before planning outfits 😉 I had made an ugly sweater tshirt special for 2020 and had a Santa mask and headband to go with it. During the show, Taylor had started “Someday at Christmas” but after singing the first line and playing with the keys a bit, ran his hand along his throat to let the others know that no, that song would not be happening that night.  Zac joked as they got ready for Joy to the Mountain that “Someday at Christmas they would play Someday at Christmas”. 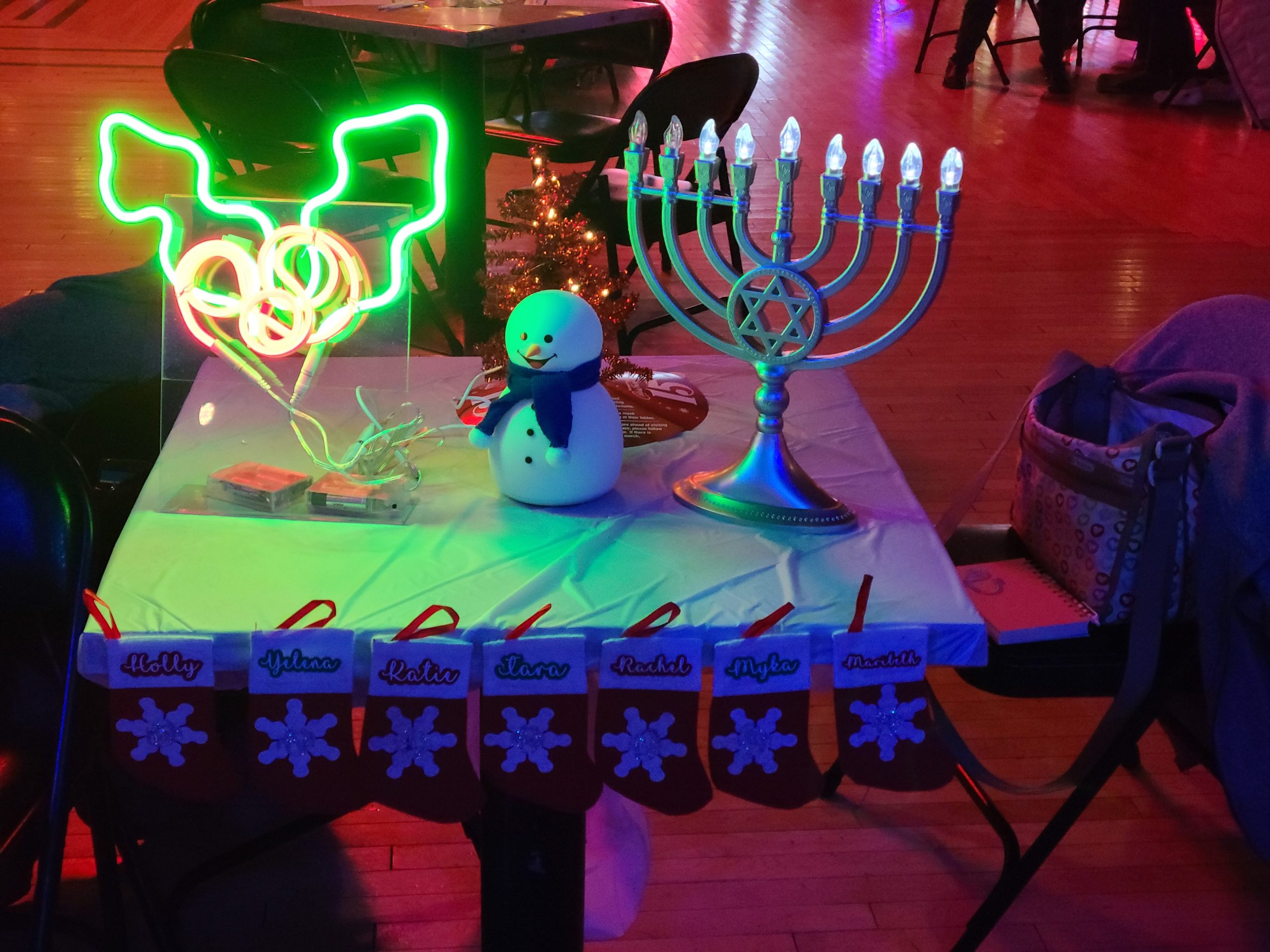 During the shows, there seemed to be a lot more chatting amongst band members than there usually was.  They mentioned how they often confuse “Please Come Home for Christmas” and “Christmas (Baby Please Come Home)” which I knew they did, because in NYC on the Finally It’s Christmas tour there was a major flub that went down (despite one being a Zac lead and one being a Taylor lead and Taylor playing the piano for one and tambourine for the other!)  They mentioned that they refer to them now as “Zac Please” or “Taylor Please” so they know which is which.  With all the songs having “Christmas” and keeping track of a setlist I ended up adopting this strategy too.  (I ended up with a strange “fridge magnet poetry”esque setlist after this show –  Baby Ball Means Nick Wonderful/Come Zac Please Time At Someday Joy FIC Peace Wine Please Taylor Rockin Blue Run Want Til Happy Sweater, Everybody!)  We also took a photo of the setlist before this show – and “White Christmas” was supposed to be included in the acapella section with Joy to the Mountain, but they last second decided to cut it.  For this show we also went silly/casual (I wore an elf hat and a “gangsta wrappa” shirt)  Also during this show Isaac did an epic photobomb on some of the girls who were in the front row trying to take pics with the stage behind them. I hope the photo came out because it was an awesome moment.

We decided that with a pretty decent table for the last show, we would go with the “ball” theme and dress up.  Of course, I can never fully commit to dressing up so I ended up wearing a Rudolph mask and antlers along with my fancy dress.  Zac and Isaac wore sweaters again, but Taylor got the memo and dressed up. For this show, we got the Silent Night medley, at least in part, so all of our Christmas song wishes ended up coming true. 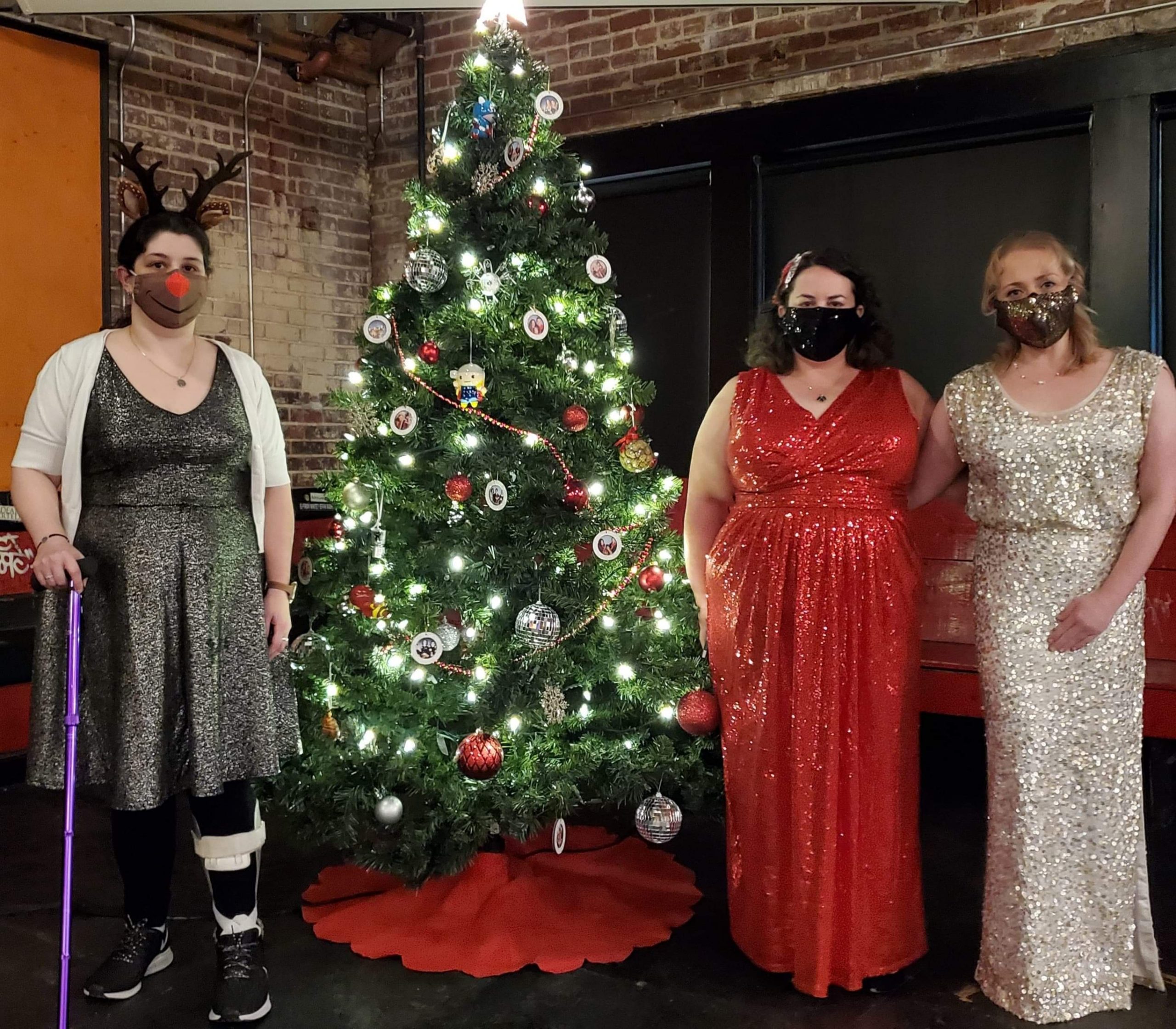 On the way home, I had a 5 hour layover in Atlanta – which was the long layover I had needed in October when I ended up getting stuck in Tulsa due to delays due to a tire change.  This time, we were on the plane and supposed to leave at 12:15, only for 12:15 to come and go.  Finally we were told that there was a potential issue and they needed maintenance to look at it, but since it was Sunday they were ‘in the field’ or ‘on call’ so they had to track them down – which delayed us to 1:15 and then 1:45.  It turned out to not be an issue at all in the end (phew!), but my 5 hour layover ended up more like a 3 hour layover in the end.  (Delta, the only thing you’ve currently got going for you is that you’re blocking middle seats…)

Overall it was a fun trip despite sticking to the hotel a lot more to avoid the public. I tested negative upon returning home and as always – this post and I have completed our 14 day quarantine.